Most likely an old miner from 2009 — not Satoshi — just moved 50 BTC mined merely one month after the first Bitcoin block was mined.

Someone, whose identity cannot be unraveled, has sent 50 Bitcoin that was mined back in February 2009 to two different wallets. Considering that the first block of Bitcoin (BTC) was mined in January of the same year, it narrows down the individual to either Satoshi Nakamoto himself or a few other miners who were present at the time.

It is highly unlikely that Satoshi himself moved the 50 BTC for various reasons. The most obvious evidence that disproves it is Satoshi is the Patoshi pattern. Early blocks that the creator of Bitcoin mined can be identified with a piece of data called “nonce.” Casa CEO Jameson Lopp told Cointelegraph in an interview:

Similarly, Nic Carter, a co-founder of Coinmetrics, said: “It’s basically impossible to prove that Satoshi didn’t mine these coins, but the best research we have suggests that Satoshi mined a specific set of blocks, of which this is not one.”

Even in 2009, Lopp explained that there were several other miners apart from the dominant one, who is speculated to be Satoshi. Hence, it could be an unknown miner who moved the 50 BTC as Lopp explained:

“Contrary to popular belief, there were several miners in those first few months of Bitcoin it’s just that the dominant miner — who many assume to be Satoshi — had a ton of the hash rate.”

Bitcoin’s price initially fell from around $9,900 to $9,300, as the market first reacted to the transaction. However, as more information about the intricacies of the transaction was uncovered, it reduced the probability of the sender being Satoshi. Shortly thereafter, Bitcoin’s price recovered.

Given that it was likely one of the early miners who was experimenting with BTC in 2009 who sent the 50 BTC and not Satoshi, the market seemingly believes that the miner had enough appealing reasons to send BTC from an old wallet, risking privacy-related issues as it gets publicized.

Low nonce decreases the probability of the sender being Satoshi. Source: Jimmy Song

When there were a limited number of services and platforms that allowed users to keep Bitcoin safely in a non-custodial manner, many users and miners kept their BTC in hard drives or external storage.

Since some miners pushed through and mined thousands of blocks and others stopped at just several, it is entirely possible that an old-time enthusiast found a hard drive dating back to 2009 and decided to move the BTC or sell it. Lopp noted in a conversation with Cointelegraph:

“Could be a million possible reasons. Maybe someone found a lost hard drive. Maybe someone needed to make a super-private transaction, so they used freshly mined coins. Maybe it’s just someone diversifying their assets.”

As such, the miner may have found an old hard drive containing about $490,000 worth of BTC and decided to diversify the assets for financial reasons. According to some experts, the activity on the wallet, especially its inputs, suggests the wallet has been active for a long period of time. That indicates the miner was likely planning to send the 50 BTC in recent months.

Based on that, it is also probable that the miner wanted to initiate a private transaction through many inputs and outputs to safely move to another unidentifiable address. If the BTC was not going to be sold, the sender would not have to go through such extensive lengths for additional privacy. The extra effort of the sender to create a complex transaction is another piece of data that suggests it was sent to be sold to the market.

But it’s most likely not Satoshi

The transaction itself is significant because BTC from early Bitcoin blocks is rare. Blocks in the 3,000-to-4,000 range come almost immediately after the cluster of blocks Satoshi is known to have mined in January 2009. It was due to the rarity and the significance of the transaction the price of Bitcoin reacted when it was first publicized. Lopp stated:

“It’s notable because it’s probably the oldest coins ever spent, so it’s mostly fascinating that someone managed to hold onto them for over a decade and by oldest I mean longest-aged before being spent.”

Knowing that it is most likely not Satoshi, industry executives said some people may go through extreme lengths to try to unravel the identity behind the sender of the BTC. Blockstream CEO Adam Back said that it may lead to wrongful doxing of early miners merely out of curiosity, which may negatively affect any early miner of BTC. Back tweeted:

“people need to chill. if Satoshi was selling coins, surely he would sell his most recently mined, and so most anonymous first. plus this patoshi research is pretty much guessing, probably he has less coins than people think, and you’ll be doxing random early miners wrongly next.”

Still, there is always a possibility that it may have been Satoshi. However, as Bitcoin developer Jimmy Song explained, a variety of technical data suggests the block, from which the 50 BTC came from, most likely did not originate from Satoshi. Song wrote:

“It’s possible, of course, that Satoshi was running Bitcoin on multiple computers and that this is from another computer than the blue strands for blocks 3653 and 3655, but given the clear blue pattern of all the coins that haven’t been spent, it seems likely that this isn’t the same person that owns the million or so Bitcoins.”

However, as almost every data point started to suggest the 50 BTC has no link to Satoshi, the market recovered, and the price of BTC rose from around $9,300 to $9,550. A Bitcoin investor known as Whale Panda tweeted: “This has been confirmed as not a Satoshi address by multiple people… but if you could please continue your panic selling so I can buy lower that would be appreciated.” 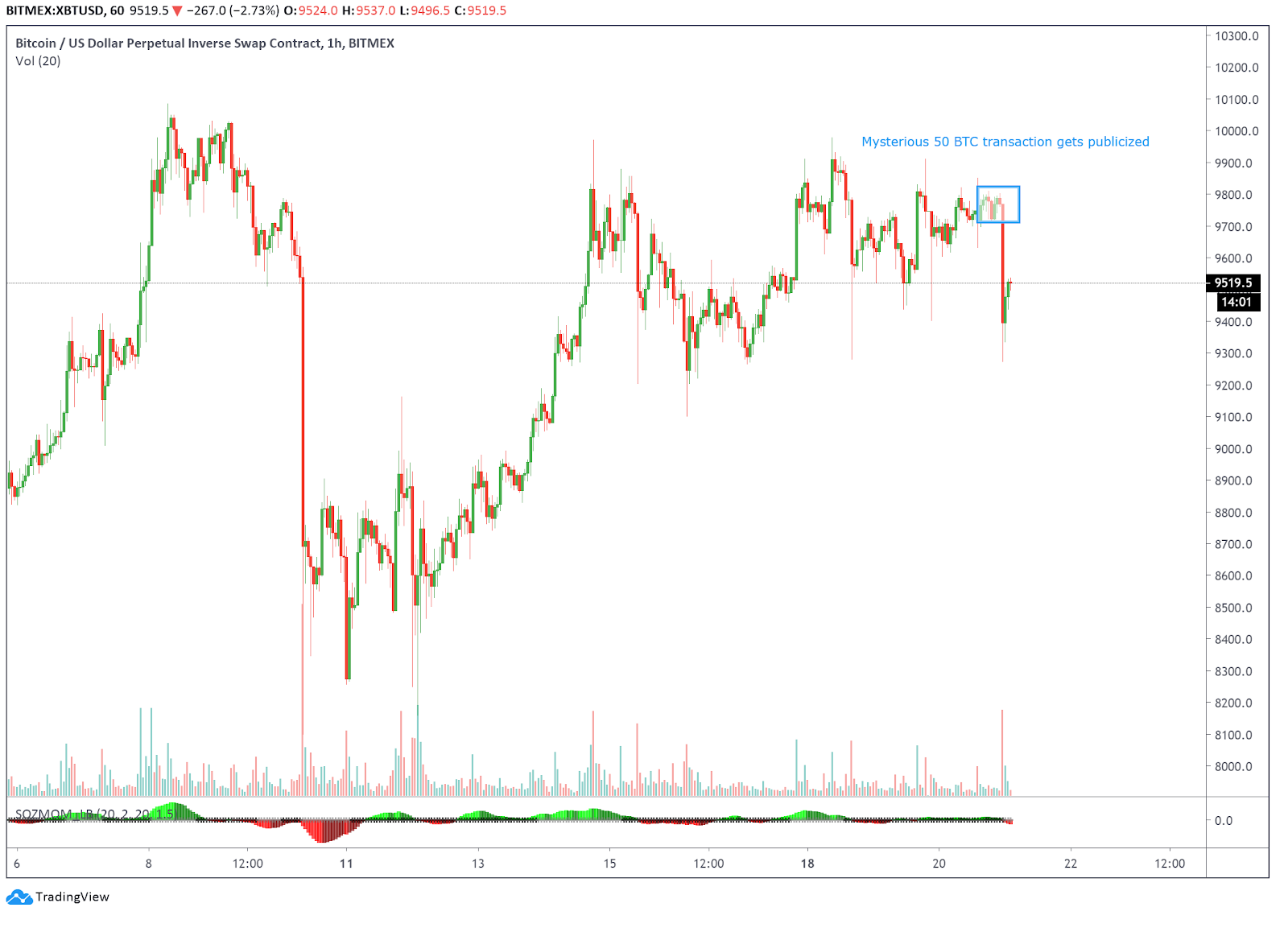 The price drop of Bitcoin in the wake of the discovery of the transaction might have been an effort of whales to take advantage of a narrative to lead a short-term pullback to areas of liquidity found at mid-$8,000 and low-$9,000.

Therefore, the high level of activity in the wallet that initially contained 50 BTC from 2009 and the lackluster reaction of Bitcoin’s price indicate that the majority of the market does not seem to believe it was Satoshi that had sent the 50 BTC.