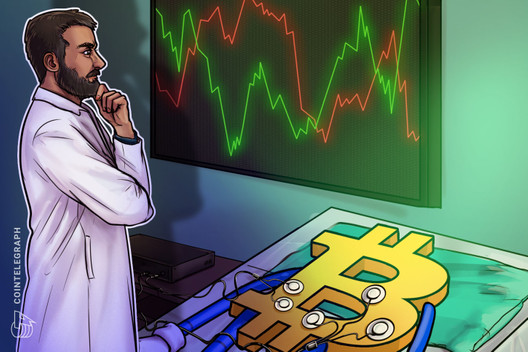 Bitcoin volatility and volumes are cooling off post-halving while a break in either direction could open the door to new market cycles.

The price of Bitcoin (BTC), the top-ranked cryptocurrency by market capitalization, has been hovering below the psychological barrier of $10,000. The halving didn’t give the market what they expected as the majority was anticipating a further decline in the price post-halving.

What’s next for the crypto markets? What can be expected from the price of Bitcoin if $10,000 is broken to the upside? 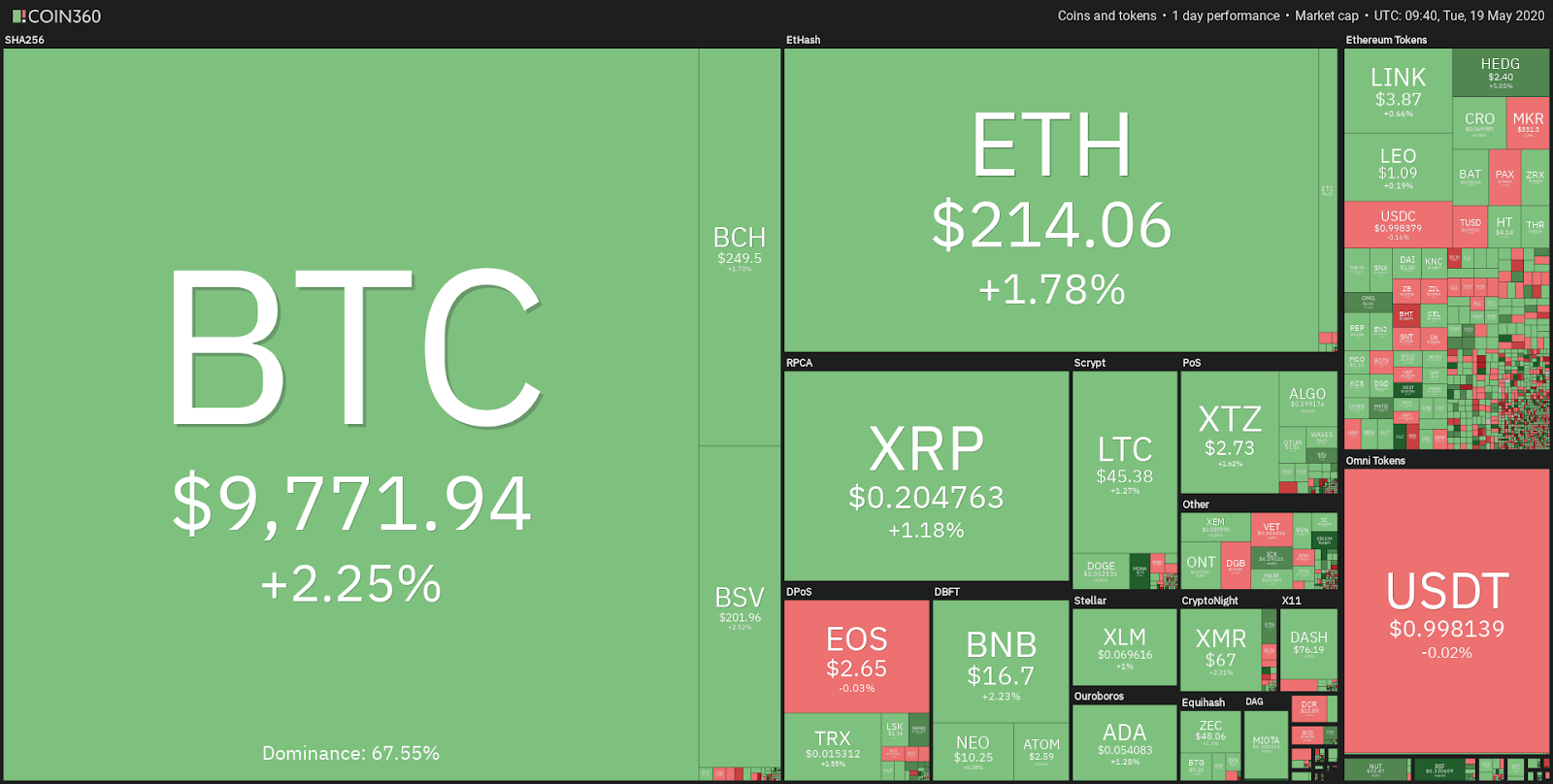 The price of Bitcoin stabilizing in a wide range 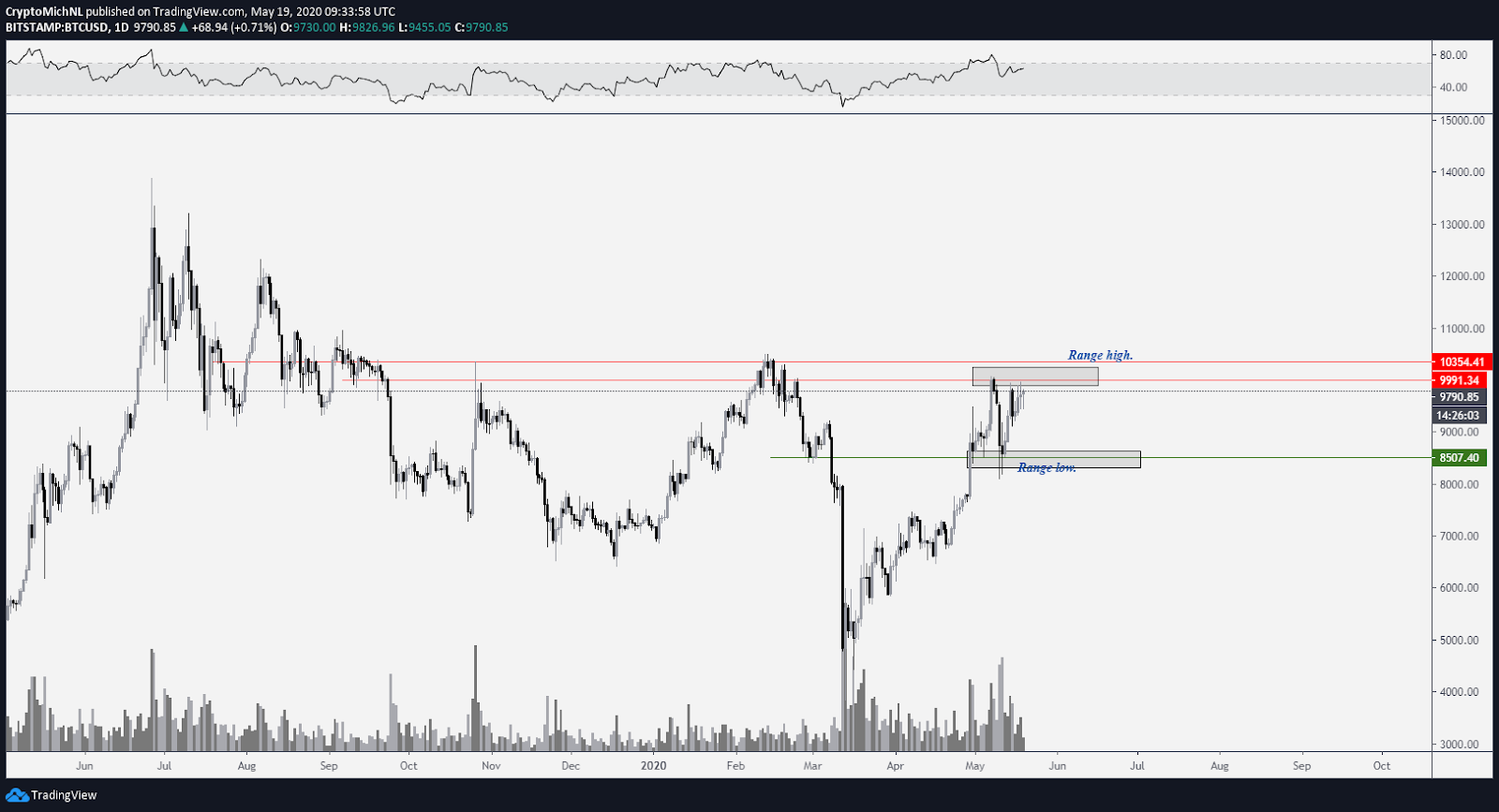 The BTC price is currently range-bound without a clear direction, which is contrary to what many expected to happen after the third halving in Bitcoin’s history that happened on May 11.

Before the event, expectations were a continuation of price rallies as the FOMO and hype started to rise. However, right before the halving, the price dropped towards the range support with a severe crash of $2,000.

Many were anticipating a further decline in price post-halving, but the opposite occurred. The price of Bitcoin rallied back towards the $10,000 resistance, closing a giant CME gap. However, there’s still an open CME gap at $9,435 on the charts. 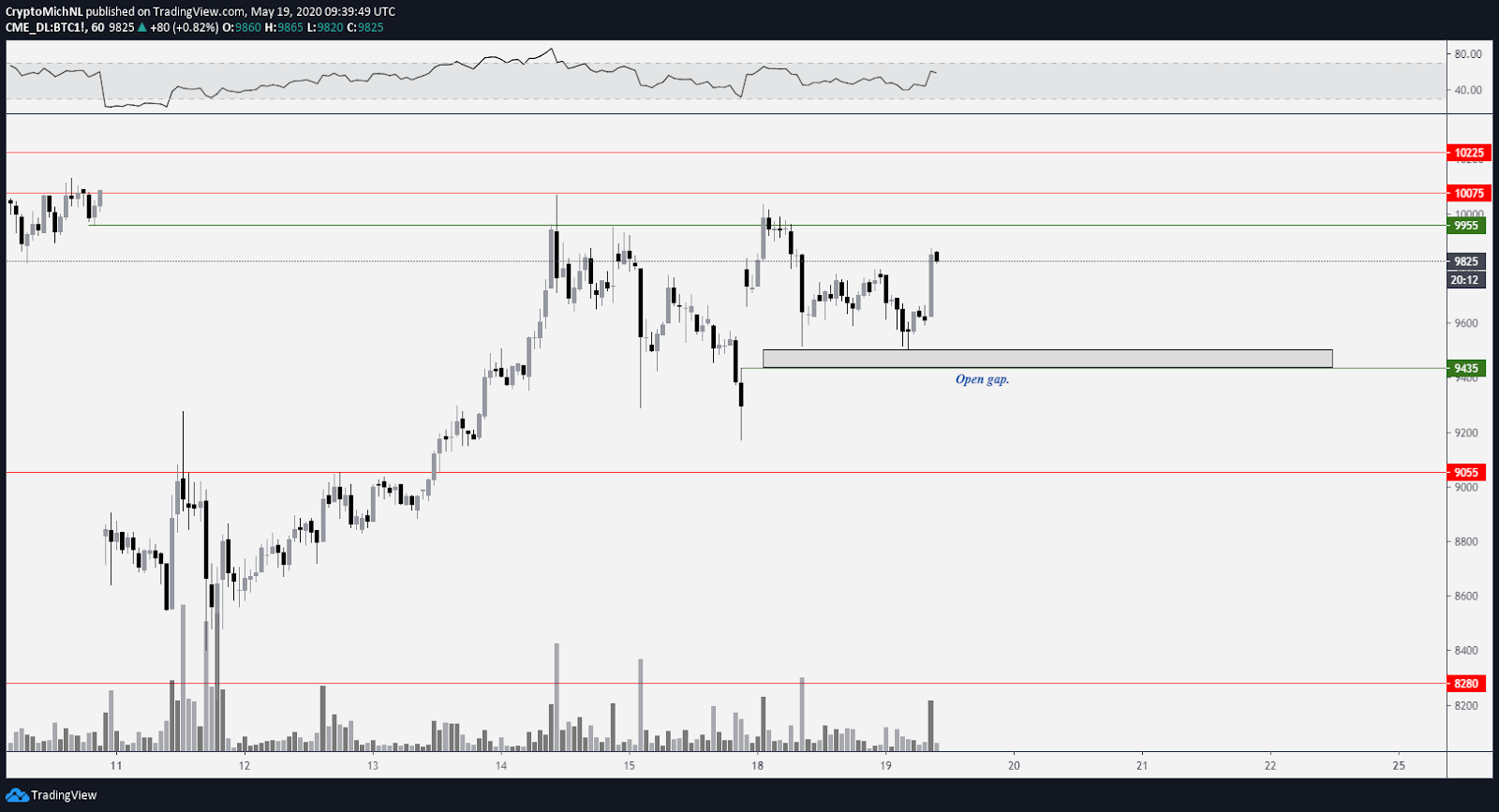 The futures chart is showing an open gap, which is ready to be filled. If you check the higher time frames, it looks like the gap is filled, as the candles overlap. However, on the one-hour timeframe, an open gap remains to be filled on the charts.

Alongside the open gap, is the halving hype still there? The hype is slowly fading away as some altcoins have been showing strength recently while Bitcoin price pulls back.

Resistance needs to break in order to continue moving upwards 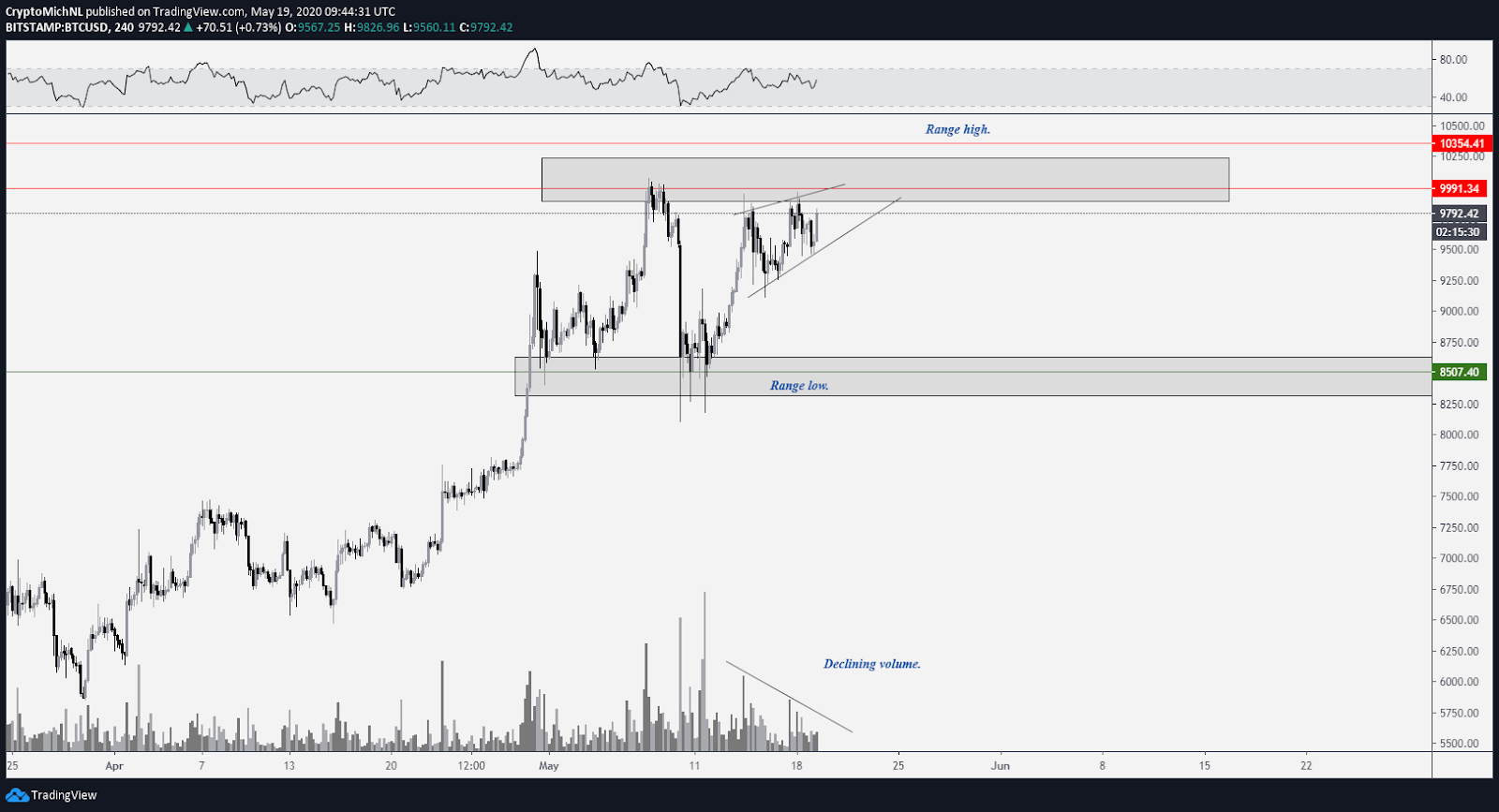 The structure on the 4-hour timeframe is quite clear. The price of Bitcoin is acting inside a resistance area with a rising wedge along the way. Alongside with these arguments, the volume has been dropping heavily in the recent movements. A decline in volume is a sign of weakness.

Therefore, short-term, down is more likely than up. And yes, that retracement is quite healthy, as the price of Bitcoin has rallied by 160% since the Black Thursday crash on March 12.

Total market capitalization is showing strength on the daily timeframe

The total market capitalization is showing strength as the 100-day, and 200-day moving averages (MA) are back acting as support. These are crucial indicators, as these MAs have been providing support throughout the entire previous cycle. 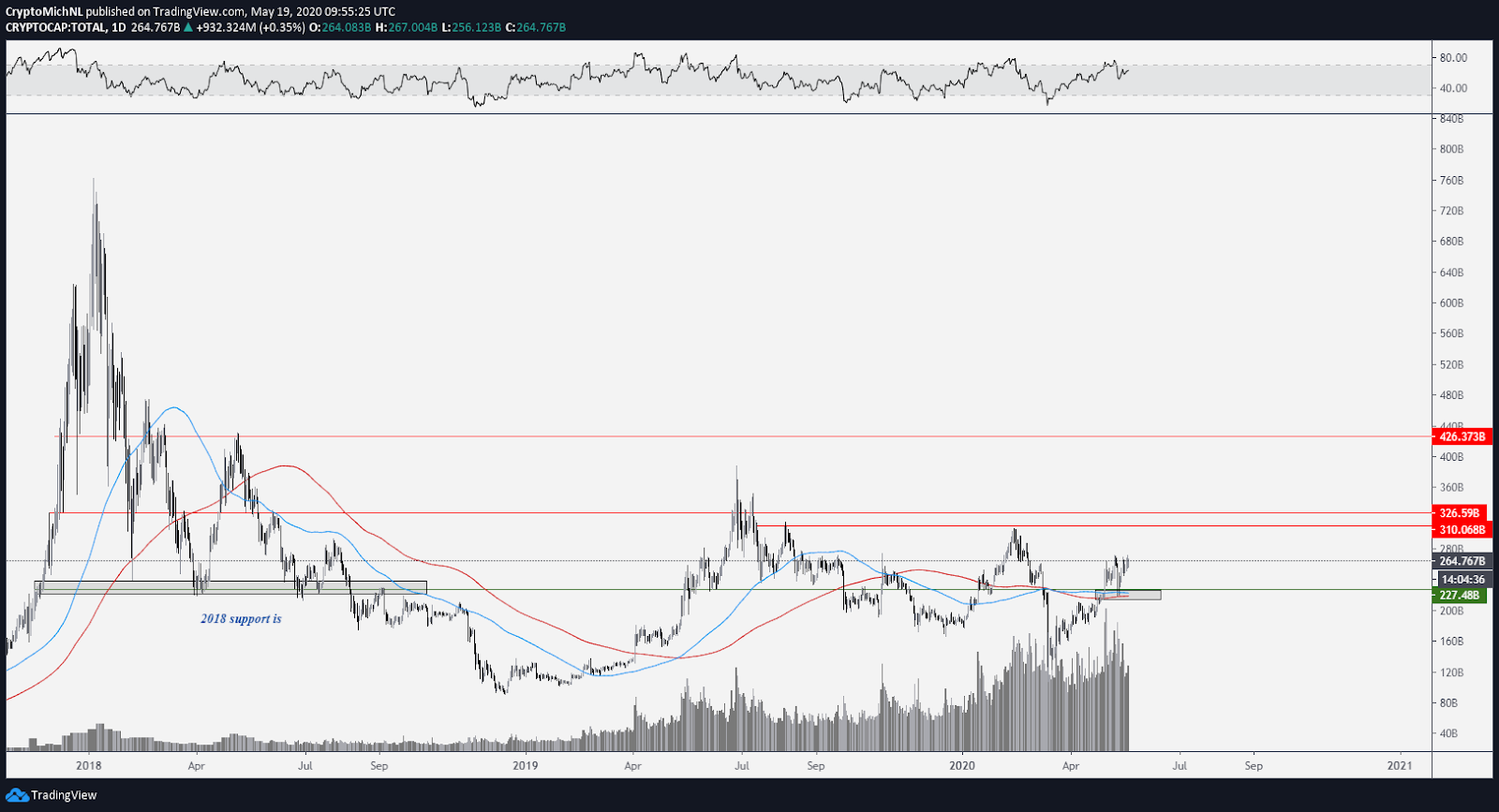 Moreover, the support of 2018 has also flipped to become support once again — a vital level that’s comparable to the crucial barrier of $6,000 for Bitcoin. 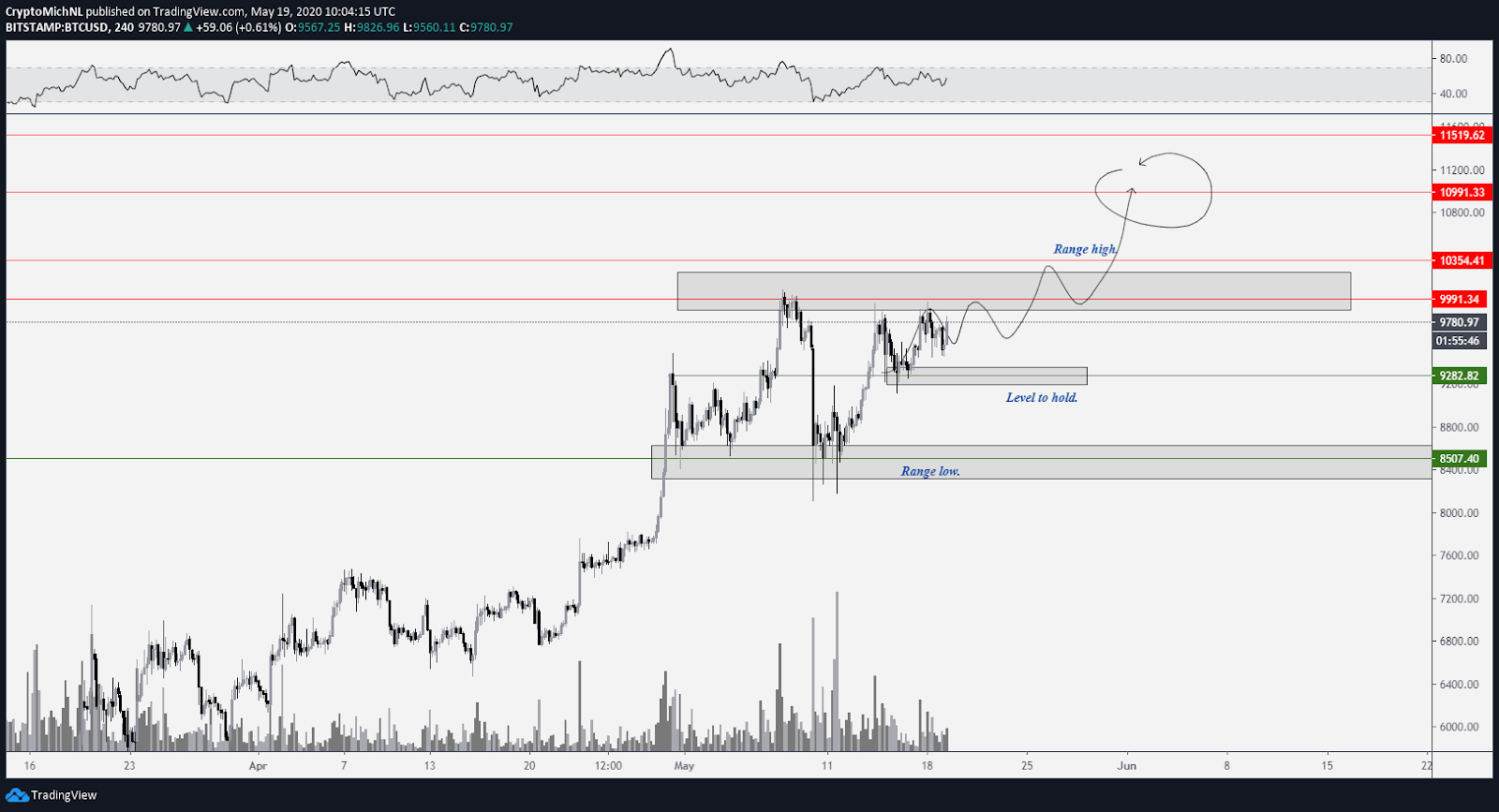 The bullish scenario is straightforward. As long as the price of Bitcoin remains above the $9,300 area for support, further upwards momentum is expected. The more often a price tests the upper resistance of $10,000–10,300, the weaker this resistance gets. This level has already been tested two times.

What targets can be determined from the charts? A clear breakout above $10,300 can result in a continuation of $11,000 and most likely $11,500. The $11,500 level still has an open CME gap from August 2019 that hasn’t filled yet. Hence, if Bitcoin’s price breaks to the upside, it’s likely to see a continuation towards that area. 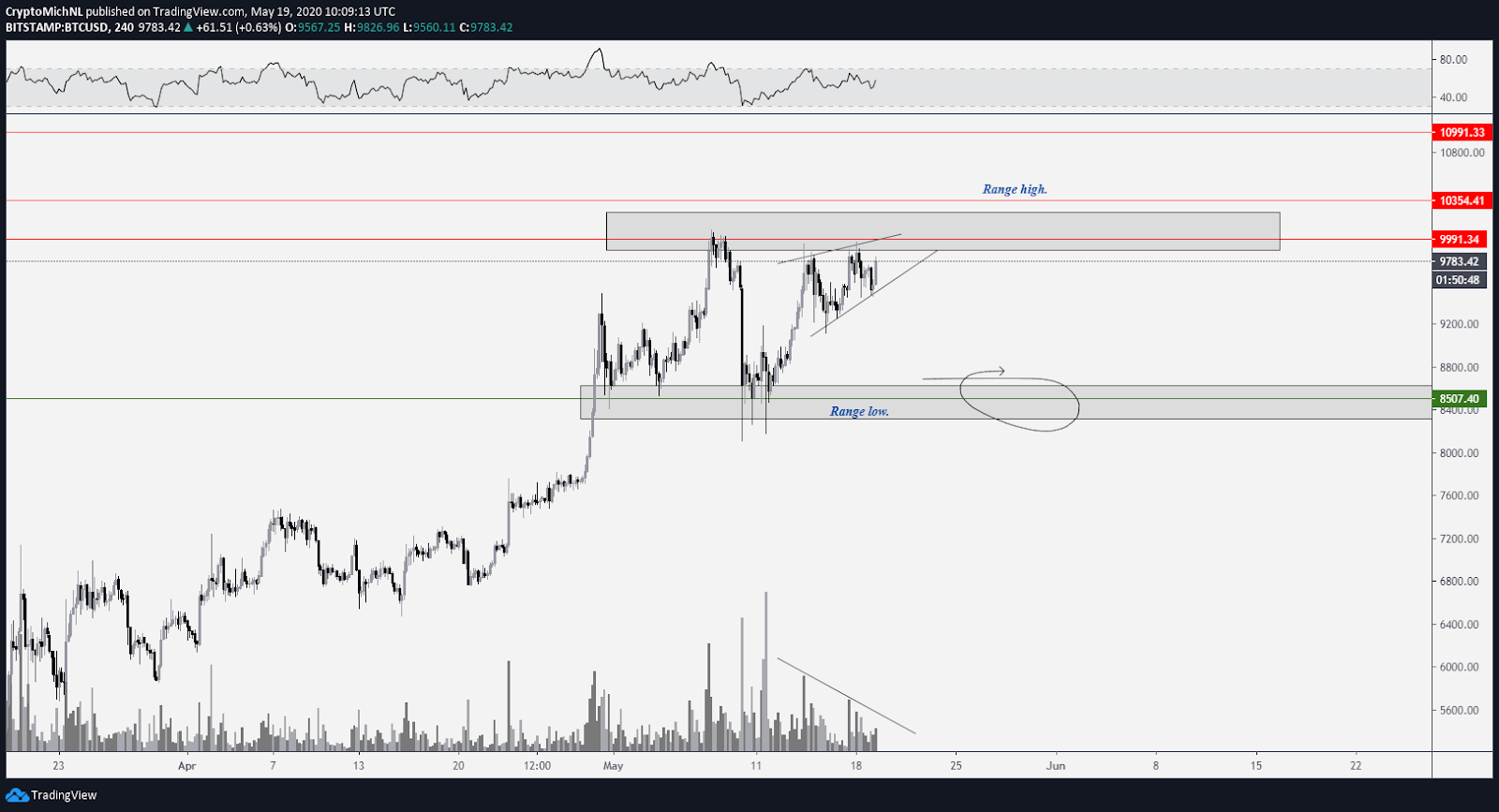 The bearish scenario is as discussed previously. The price of Bitcoin remains below the resistance area with declining volume. The structure is also called a rising wedge.

Usually, the sentiment starts to improve as the price is moving up. However, as the chart is showing, it’s time to become slightly cautious about such a move. The hype around the halving is decreasing and more sideways action could be in order. 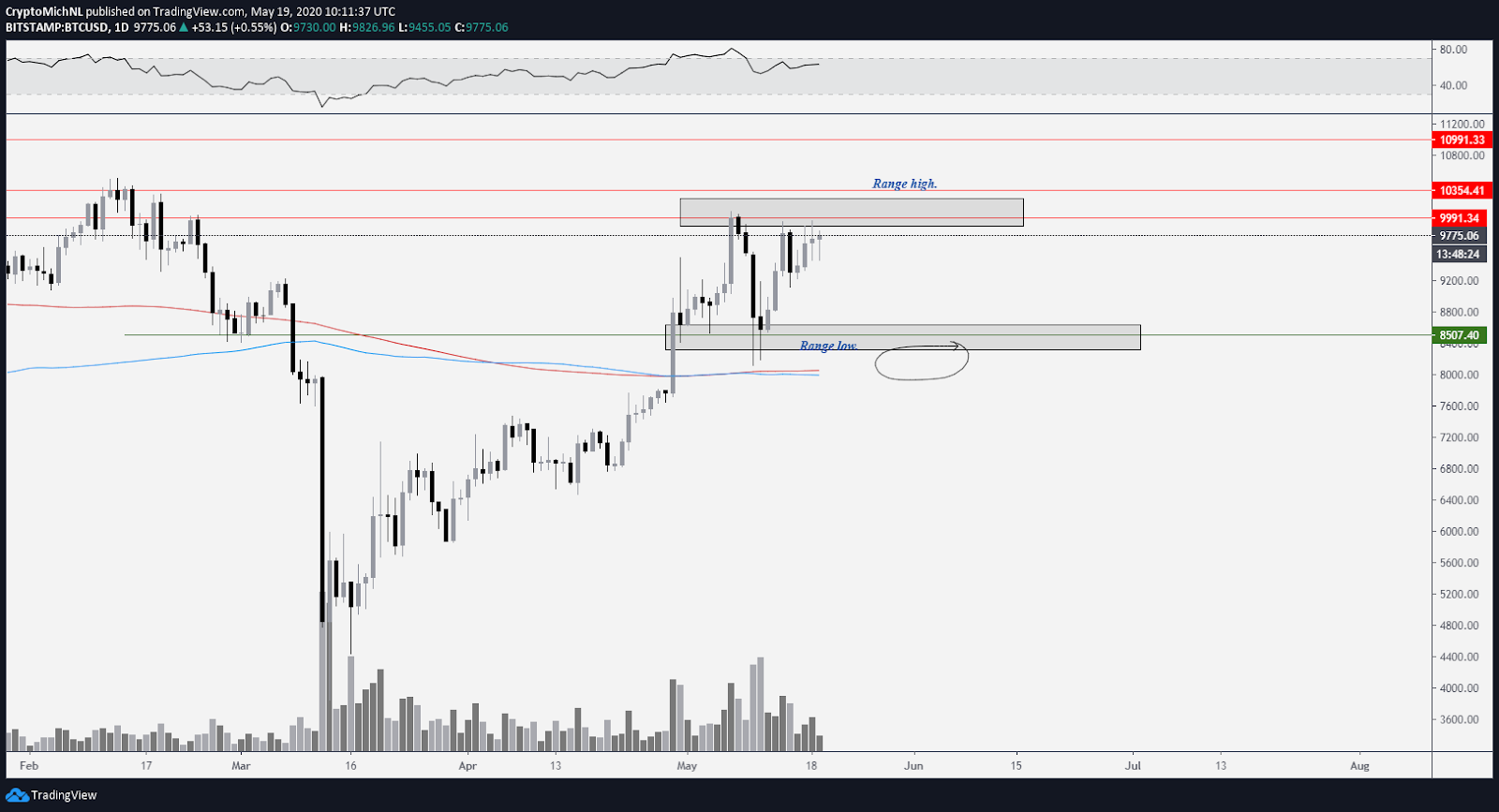 The daily time frame is showing that the price of Bitcoin is acting above the 100-day and 200-day MA. That’s a bullish outlook. However, in the short term, a bearish corrective move is not unhealthy for the market.

The level to keep an eye on include the range low around $8,200–$8,500, which perfectly lines up with the 100-day and 200-day MAs, as they should crawl upwards to these support levels.

Once the price of Bitcoin loses these MAs, there’s some real trouble for the market, with further corrections becoming more likely.