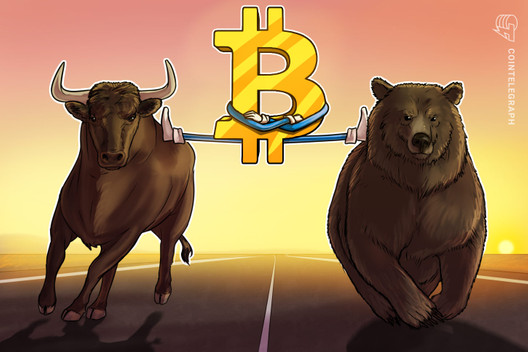 The price of Bitcoin rejected $12,000 for the second time in a mere 10 days. Now, traders discuss where BTC is headed next.

The price of Bitcoin (BTC) rejected the $12,000 resistance level for the second time in the past 10 days. Traders are generally optimistic about the short-term trend of BTC, following its extended consolidation below a critical resistance level.

When an asset stays relatively stable near a major resistance area, it typically suggests a bullish continuation is likely. It shows that sellers do not have enough pressure to push BTC down to a pivotal price point. Many traders seemingly anticipate the price of Bitcoin to remain in the $10,500–$12,000 range. If BTC does not drop below a key support level at $10,500, technical analysts say that the bullish market structure will remain intact.

The confluence of a positive global macro backdrop and a robust market structure are just some of the encouraging sentiments around Bitcoin, but investors have also expressed concerns about some short-term roadblocks facing it.

The primary factor behind predictions for a bullish continuation of Bitcoin in the near term is its long-term market structure. Analysts say that the high time frame charts of BTC, like the monthly chart, indicate a clear breakout, with BTC escaping a prolonged price range that often leads to an extended rally, especially if the breakout occurs on a high time frame chart. Raoul Pal, CEO of Global Macro Investor, stated:

“Super early days for what is likely to be a very big move as institution finally follow what retail BTC investors have known all along — that this is the future and its wildly under priced.”

Since its peak in 2017 when it almost achieved the $20,000 mark, BTC has ranged within a multiyear price range, bottoming out at $3,150 in 2018 while seeing a local high of $14,000 in July 2019 and establishing a three-year range. But when the price of Bitcoin recently surpassed $11,500, it confirmed on the weekly and monthly charts that the dreaded range has been broken. Various market data could also supplement the uptrend of Bitcoin over the longer term.

Kyle Davis, co-founder of Three Arrows Capital, hinted that there is a small gap between $14,000 and $20,000 in the options market. Citing data from options exchange Deribit, Davis said, “$BTC air above $14k up to $20k,” which suggests that a breakout above $14,000 could fuel the next BTC rally.

Some Bitcoin traders also emphasized that the current market structure of Bitcoin is highly optimistic. Scott Melker, a cryptocurrency trader, said that the absorption of Bitcoin’s dips shows that the trend of BTC is bullish: “It’s dip buying season and that any chance to grab a higher low is welcome. This is a bullish chart, period.”

In the four-hour price chart of Bitcoin published by Melker, Bitcoin recorded four higher lows, or four local low points that are higher than previous lows. A higher low pattern in technical analysis is considered a positive formation because it demonstrates strength from buyers. Every dip in the past 10 days was bought by Bitcoin buyers.

The positive technical factors surrounding Bitcoin have been complemented by encouraging on-chain data points. According to on-chain market data provider IntoTheBlock, the number of Bitcoin “HODLers” has substantially increased:

“The HODLING trend for #Bitcoin continues. As can be seen in the graph below the number of $BTC hodlers has increased by almost 4 million within the last twelve months. As of August 9, a total of 20.47 million addresses were holding 11.51m BTC for over a year.”

In the short term, Bitcoin faces two obstacles: first, a historically relevant fractal, and second, a slight drop in liquidity. Both factors could impose selling pressure on Bitcoin in the near term, but compared to a few weeks ago, the overall sentiment around BTC remains positive.

Nik Yaremchuk, a cryptocurrency trader, said that historical fractals hint at a short-term pullback. He compared the current price action of Bitcoin to that seen in May. Three months ago, BTC also saw a similar trend where the price looked to break out and then recorded a correction: “We now have a fractal since May 2020, where we have been in range for a while, I do not think that we are here for long, but it seems to me that we will get another dip.”

The fractal coincides with a slight decline in the liquidity of Bitcoin. Market research firm Glassnode said that while the overall transaction rates of BTC are healthy, they declined slightly in the past week:

“Liquidity also saw a slight decrease, losing 3 points due to a drop in the transaction liquidity subcategory. This, in turn, was caused by the above-mentioned decrease in the number of on-chain transactions over the past week. However, overall transaction rates remain high relative to pre-bull market levels.”

Still, speaking to Cointelegraph, Denis Vinokourov, head of research at exchange and brokerage platform BeQuant, said that Bitcoin being rejected at $12,000 is not necessarily bad. The pattern of an upsurge followed by consolidation stabilizes the market and provides investors some breathing room:

“Price discovery and consolidation following a strong run up is an indication of a healthy two way market flow. Price rejection is not necessarily a bad development, as it gives market participants an opportunity to take stock of the situation and look to align the interest of both leveraged/speculative flow and those of long-term holders.”

In the upcoming weeks, there are several variables that could affect Bitcoin and other major cryptocurrencies. The most prominent factor that might impact Bitcoin is likely the upward run of altcoins.

In recent weeks, altcoins, especially in decentralized finance, have gained substantially against major cryptocurrencies. Band Protocol’s native BAND token and Chainlink’s LINK, for example, rose by 348% and 88%, respectively, from Aug. 1 to their monthly highs.

In the near term, whether profits from altcoins will flow into Bitcoin remains in question. Vinokourov noted that the willingness of the market to take on additional risk with altcoins demonstrates a positive market sentiment:

The combination of a favorable high time market structure and positive on-chain data has lifted the sentiment around Bitcoin in the longer term. But in the short term, some predict a minor pullback, which would make the market less overheated.