Bitcoin Price Holds Key Support and Is on the Verge of Testing $10,000 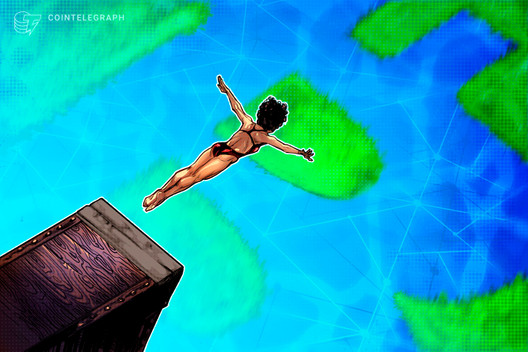 Bitcoin price finally made a move — to the upside — as the door is now open to test the crucial $10,000 BTC price level.

Recently, the price of Bitcoin (BTC) has been showing virtually zero volatility. This volatility decreased particularly as of late while Bitcoin was resting on the crucial support level of $9,000.

But on July 21 Bitcoin finally made a sudden move, as expected in the latest analysis, and the price surged from $9,100 to $9,400. So is volatility back or is this just nothing more than a blip? Let’s take a closer look. 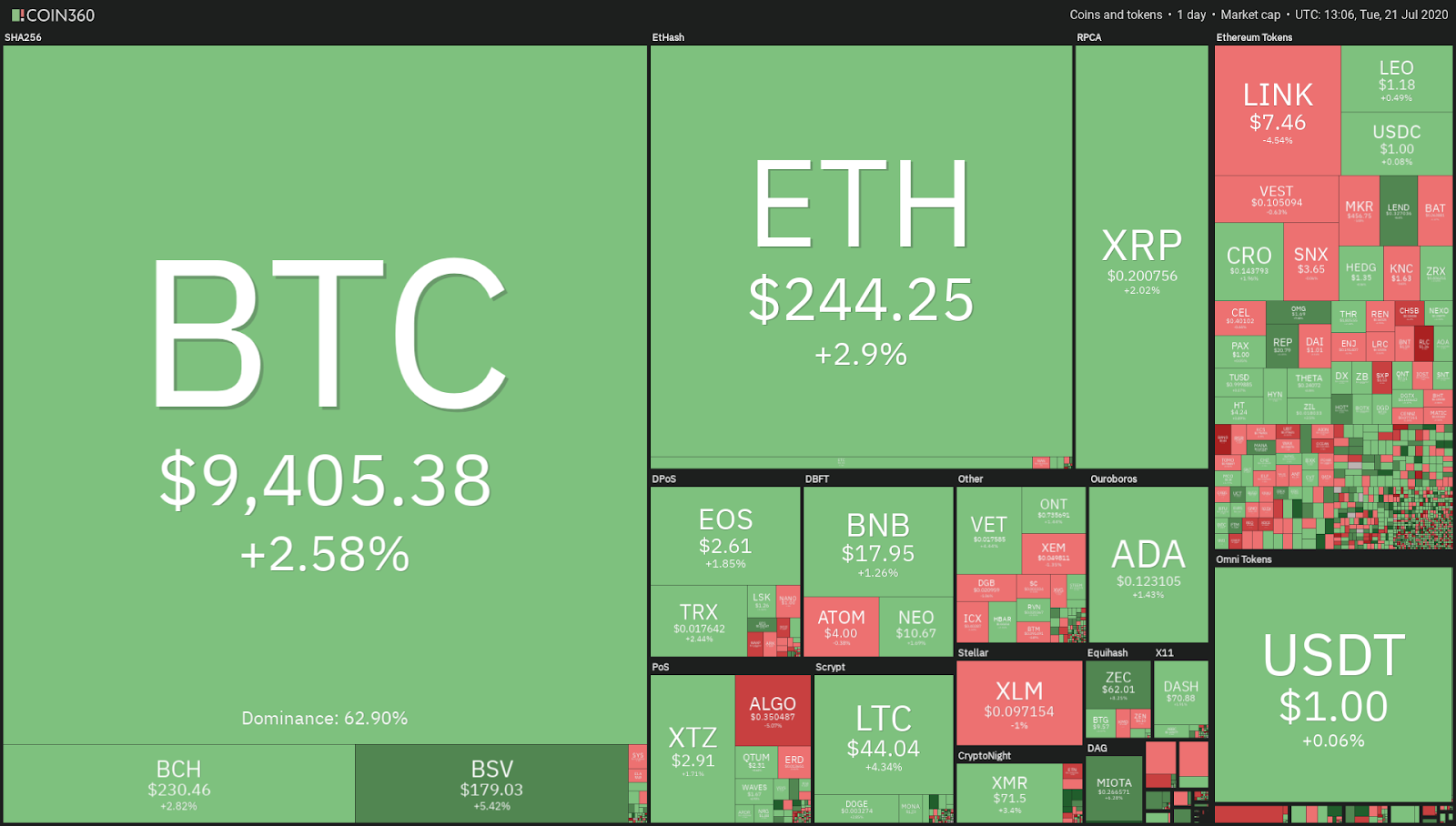 Crucial support of $9,000 holds for support

The price of Bitcoin held the crucial support at $9,000 and broke upwards. However, the price of BTC is still inside the ascending triangle structure.

This means that the price of the top-ranked cryptocurrency by market capitalization is continuously making higher lows since the March 12 crash. Since then, every previous resistance level got confirmed for support, initiating bullish support/resistance flips and further upwards continuation. 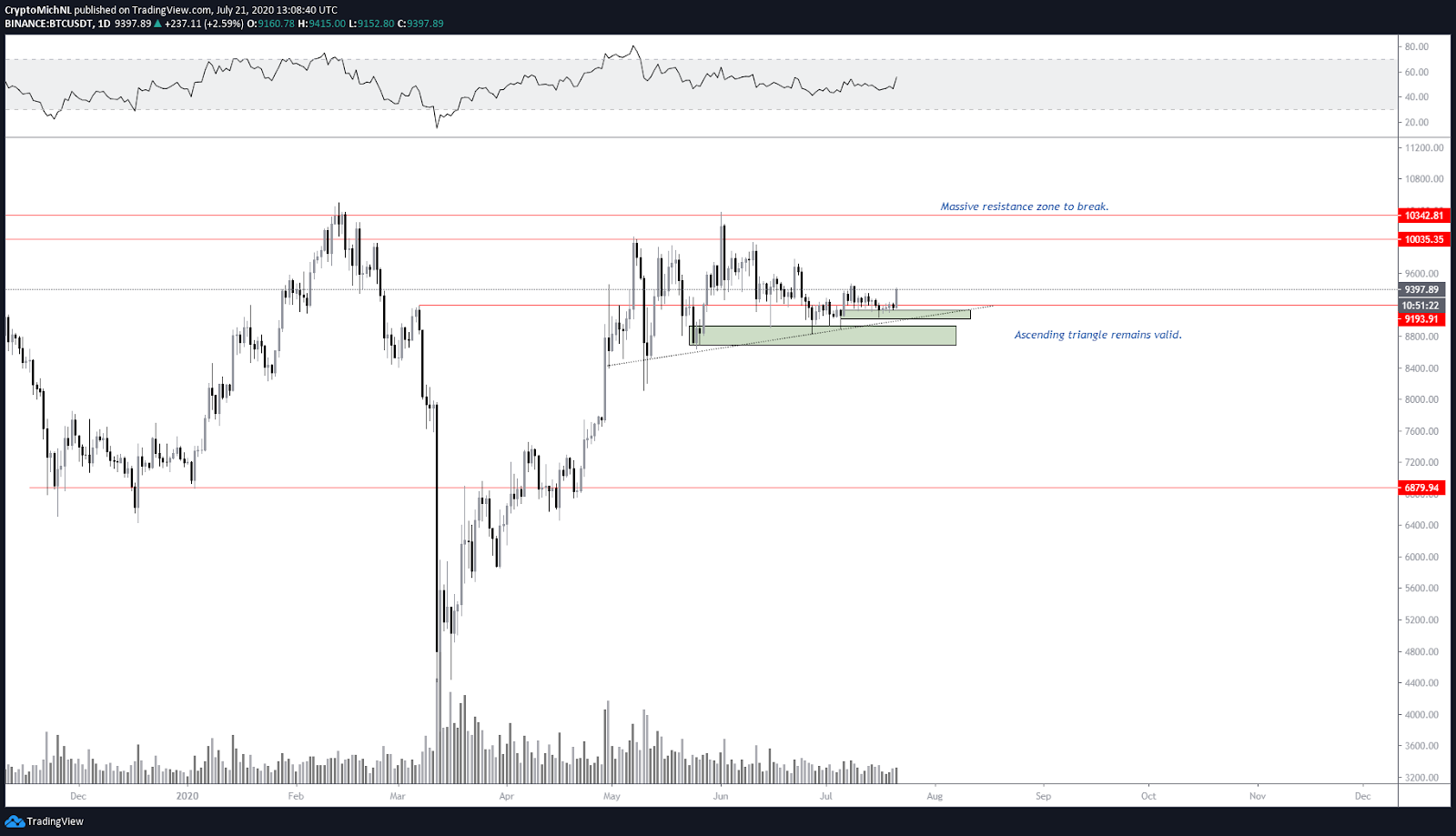 Similarly, Bitcoin’s price is still acting above the 100-day and 200-day moving averages (MAs), which is a bullish signal. As long as Bitcoin’s price remains above these MAs, the market is in bull territory.

However, a sudden massive surge is unlikely to occur, given that Bitcoin’s price is still acting inside an enormous range. 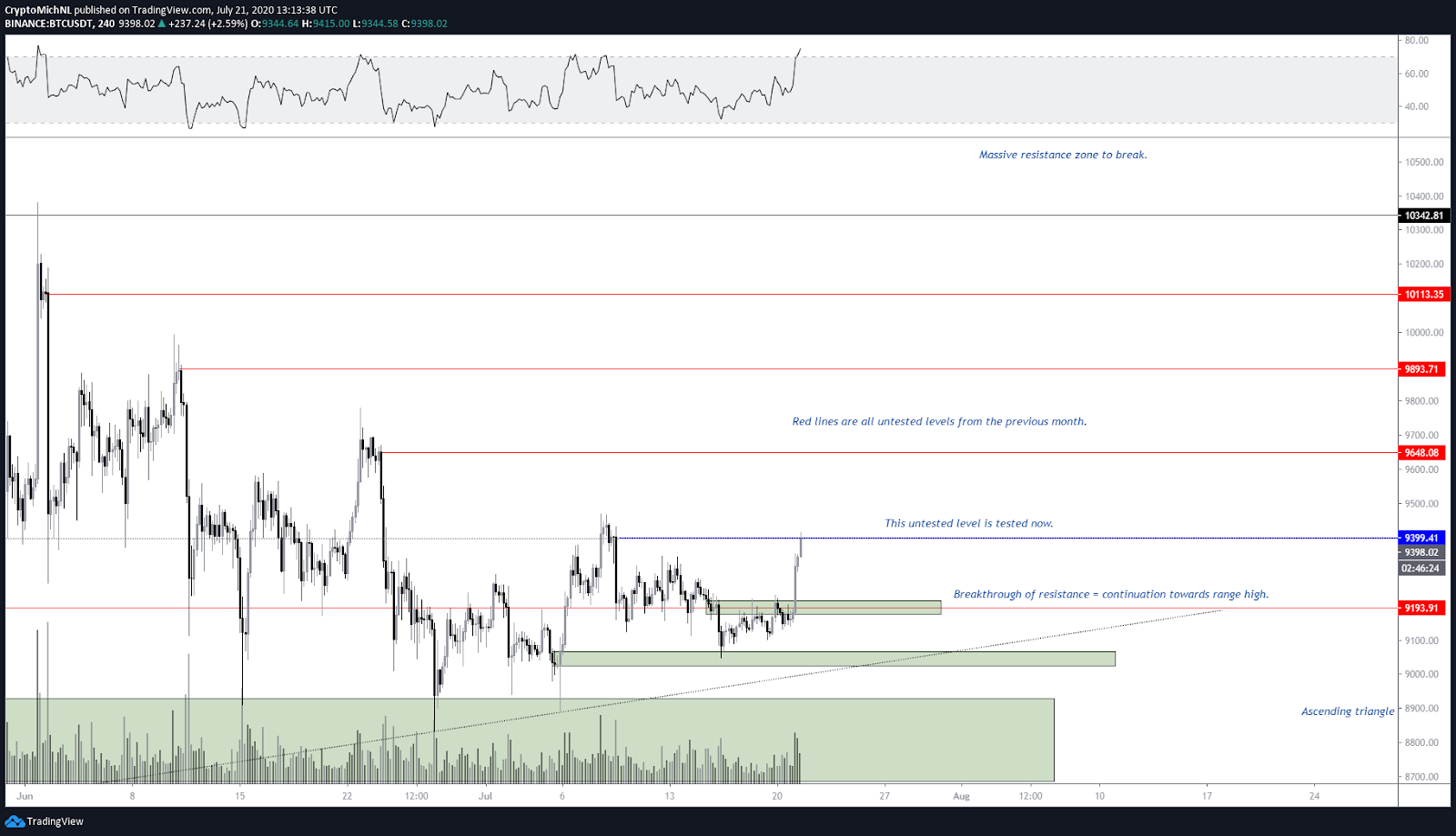 The likeliness of a $1,000 candle is getting higher once Bitcoin reclaims the untested levels, shown in the chart.

Until then, the likelihood of continued range-bound movements persists. In this case, every previous level is likely to receive a test for confirmation of the breakout, after which the next level will likely get tested. 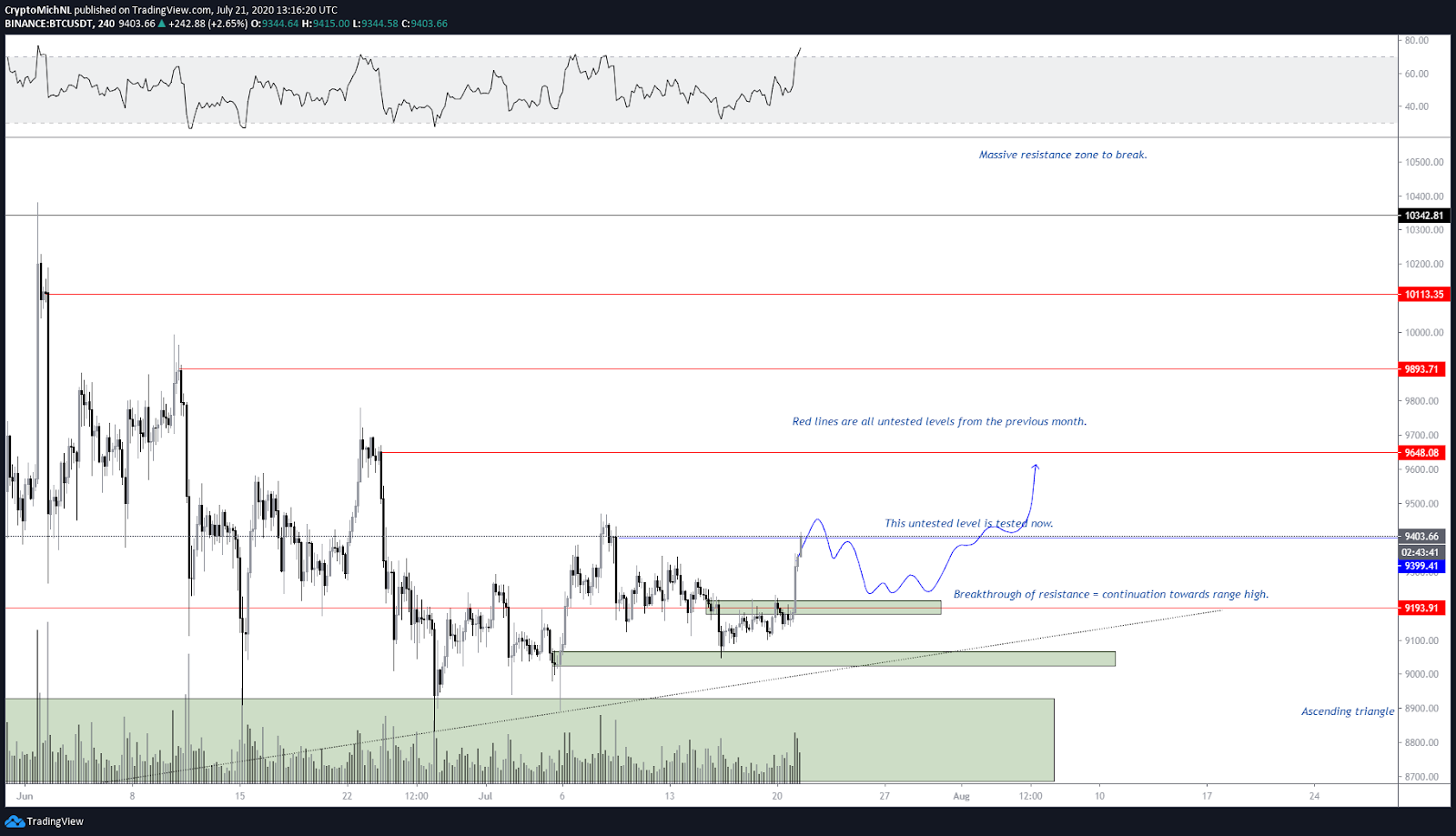 The bullish scenario would mean a continuation toward the $9,600 level in one-go or a corrective move before continuation.

In that regard, a retest of the previous level at $9,200 for support is not typical. If such a retest occurs, the next compression and breakout will likely open the door to $9,600 and possibly $9,800.

As the chart shows, these movements are the exact opposite of what the market has witnessed previously. In the past month, the market witnessed an overall slip, though now the opposite is more likely in the coming weeks.

Currently, the crucial support level to hold is $9,200 as this boosts the chances of more upside. 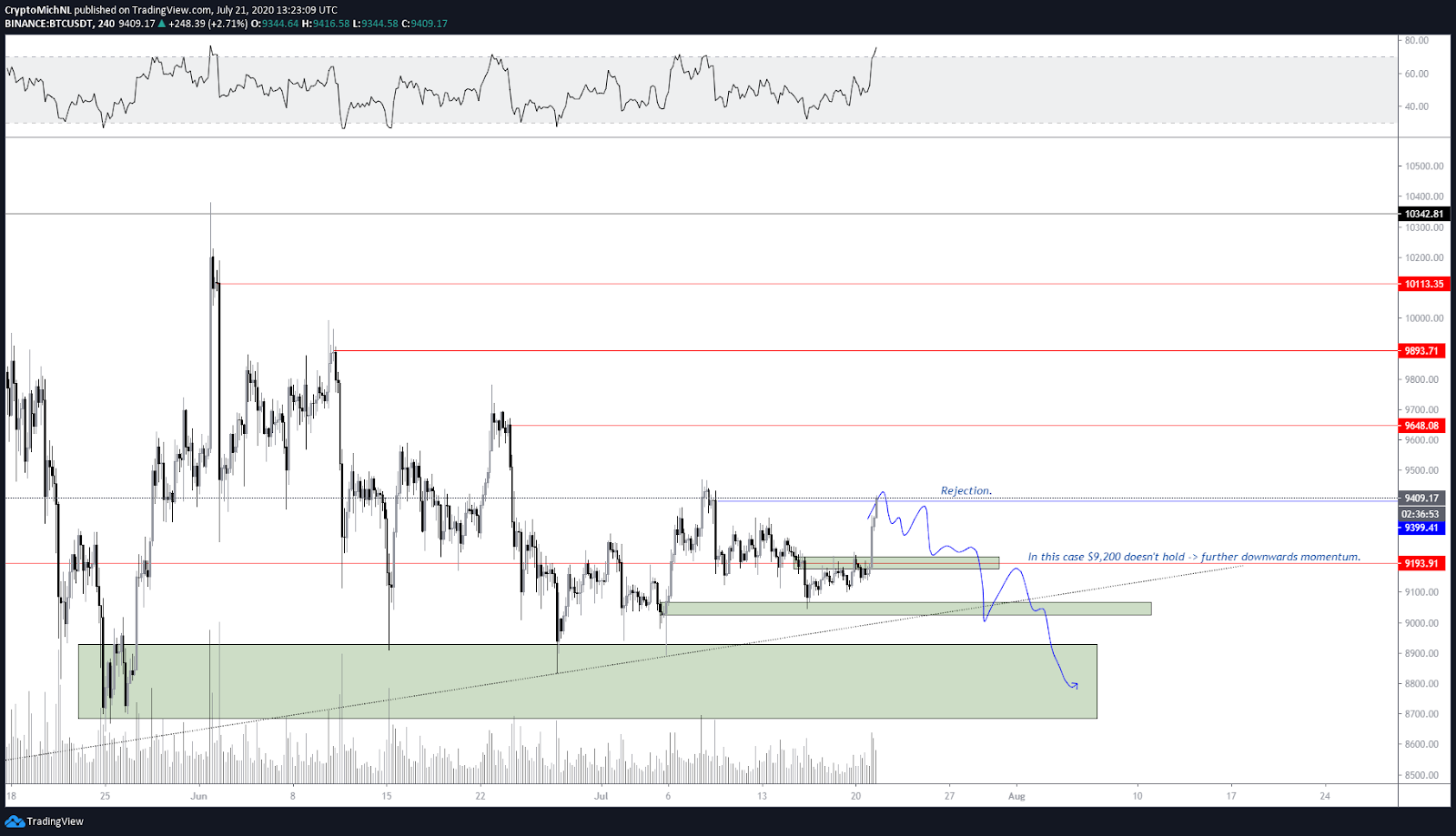 The bearish scenario also has the critical pivot at $9,200. In this scenario, the price of Bitcoin can’t break $9,400 and immediately loses the $9,200 support level.

If that happens, a further downward drop is likely to be expected as the ascending triangle becomes invalid.

Overall, the market should sustain upward momentum as long as $9,200 holds, which also increases the chances of testing new yearly highs.