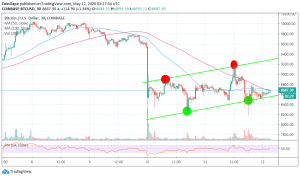 Bitcoin halving went smooth smoothly as expected. However, the price action remained largely unchanged with BTC stabilizing between $8,500 support and $8,700 resistance. Many people in the industry expected a rally in the price during the halving process, however, history suggests that the impact of halving is usually gradual. Therefore, investors can expect a stronger bullish momentum towards the end of the Q2 and a significant breakout towards the end of 2020 and in the course of 2021.

Following the breakdown over the weekend when Bitcoin price nosedived from levels close to $10,000 to $8,100, a recovery has been steady but gradual within a short term ascending channel. The first attempt to recovery following the drop hit a snag at $8,800 as shown on the 30-minutes graph. Rejection from this level confirmed another support at $8,200. BTC/USD launched another attack stepping above $9,000 on Monday. However, the seller congestion at $9,200 cut short the action.

At the time of writing, Bitcoin is valued at $8,670 and battling resistance at the confluence formed by the 50 SMA and the 100SMA. According to the RSI, a consolidative price action is likely to take precedence before the ultimate breakout above $9,000.