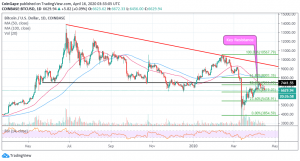 Bitcoin has spent the week trying to recover from the fall it encountered last week amid a drop from $7,441 (on Coinbase). The digital asset took a breather above $6,500 and even recovered topping levels past $6,900. However, it has become increasingly difficult to sustain gains towards $7,000.

For this reason, another lower correction on Wednesday forced Bitcoin below various support areas $6,800 and $6,600. The bearish keg extended under $6,500 before finding refuge at the 38.2% Fibonacci retracement level taken between the last swing high at $10,567 to a swing low $3,854. A shallow bounce from this level catapulted BTC/USD above $6,600 but the next short term hurdle at $6,700 is still standing in the way.

In spite of the fall to levels marginally below $6,500, Bitcoin buyers have managed to remain in control and even reclaimed support above $6,600. At the moment, the focus is still on breaking the resistance at $7,000 and pulling BTC/USD above $8,000 as we approach the May 2020 block reward halving.

Exchanges are experiencing a drop in the number of cryptocurrency assets in their custody. Particularly, Bitfinex and BitMEX have seen a significant fall in the last few weeks. Intriguingly, the transfers made to exchanges have not been altered much; they remain at par with those in mid-2019.

Meanwhile, Bitcoin is likely to enter into a consolidation period above $6,600. The RSI downward slope has slowed down and if levels around the average (50), then sideways action could take center stage. The support at the 38.2% Fibo is expected to remain in place as long as other technical levels such as the RSI and the MACD maintain stability. Gains above $7,000 are still possible heading into the halving event.