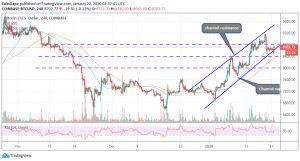 Bitcoin price is exchanging hands 0.20% lower on Wednesday towards the end of the Asian session. The trend has been mostly bearish since the opening. However, the American session on Tuesday briefly revived the bullish action, allowing for gains past the resistance I discussed at $8,700. The bulls’ ability to defend $8,500 support also played a key role in the shallow recovery.

The rising channel explored on Tuesday did give in to the bearish pressure. However, the bulls quickly reclaimed the support within the channel. Unfortunately, the price lacked the momentum to deal with the resistance at $8,800.

At the time of writing, Bitcoin price is dancing at $8,705. There is growing bearish pressure towards $8,800. At the same time, the bulls know better to defend the short term support at $8,700. As long as the price stays above the channel support, Bitcoin buyers will have the time to gather the strength to push for an assault at $8,800 and $9,000, respectively.

Meanwhile, the Relative Strength Index (RSI) hints that the bulls still have more influence over the price. The trend is likely to remain bullish in the European session. Moreover, if the low volatility and low trading volume increases, Bitcoin could be fundamentally prepared to correct above $9,000.

As far as support is concerned, $8,500 is key support (has stopped losses twice in the last seven days). Bitcoin will also take advantage of the support established at $8,400 and $8,000 if losses gain momentum.

RSI: Recovery stalls at 50 as bears fight to take over