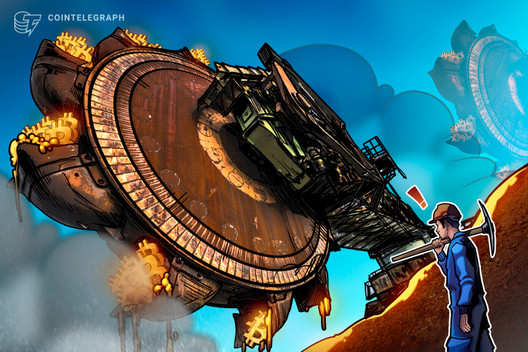 The price of Bitcoin fell by 3% as on-chain data shows miners are starting to sell BTC on exchanges once again.

Throughout the past week, on-chain analysts have said that miners have been selling relatively larger amounts of BTC.

Miners are one of the two unmatched sources of selling pressure in the cryptocurrency market besides exchanges. Consequently, when miners move their mined BTC, it can cause immense selling pressure to build.

Cointelegraph reported on Sept. 3 about the transfer of BTC funds from major mining pools. Ki Young-Ju, the CEO of the analysis firm, said:

“As I know, some Chinese miners already realize their mining profitability (return on investment), and they might not want new mining competitors joining the industry because of the bull market.”

Meanwhile, according to Glassnode, a metric that shows the inflow of capital from miners to exchanges just hit a five-month high. The previous spike was seen in mid-August when BTC price hit its 2020 high of over $12,000, which was immediately followed by a correction toward $10,000.

If BTC recovers swiftly from pullbacks led by miners, it would indicate sufficient demand from retail investors on exchanges. But if the price of BTC continues to drop, it would suggest that there is not enough demand to absorb the selling pressure.

What traders say about BTC in the short term

In the short term, traders are generally cautiously optimistic despite the rejection of BTC at the $10,500 area.

Traders say that such a major resistance level is unlikely to get breached at a first attempt. A minor rejection at the resistance was also likely given its historical importance.

A pseudonymous trader known as “Byzantine General” said short contract liquidations were hit after the initial increase to $10,500. In the near term, the trader said he expects a rebound or a minor drop to $10,100, explaining:

“As usual, liquidity levels are where it’s at. Liqs get taken, price dumps. We just took some liqs again. I can see this going back up from here, otherwise it maybe dumps a bit further to 10100.”

Scott Melker, another popular cryptocurrency trader, said that the $10,500 region was a major resistance for Bitcoin.

Considering the significance of the resistance level, the trader said it is not likely to result in a major pullback. Melker said:

“Don’t expect a major resistance to be broken on the first test. Also, don’t expect the first rejection to lead to an epic dump.”

Meanwhile, in his latest Bitcoin price technical analysis, trader Michael van de Poppe also pointed out this level as an important barrier to break in the short term. But for the bullish trend to continue previous resistance levels must be tested and confirmed as new support before moving higher, he explains.