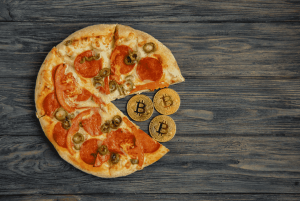 Only 11 days after celebrating Bitcoin [BTC] halving, yesterday, crypto enthusiast and teams celebrated an iconic story of one of it’s first retail transactions by eating pizza. It was the day (22nd May 2010) when an early Bitcoin miner, Laszlo Hanyecz, spent 10,000 BTC to purchase two pizzas at a Papa John’s outlet.

At current prices, it amounts to over $90 million. To many this sounds like stupidity, also, could be an act of frustration or disbelief from an early user? But, according to this report from Nic Carter, partner at Castle Island Ventures and co-founder of Coinmetrics, it could have been an act of sacrifice for apt distribution of Bitcoins. Moreover, Laszlo was not a naive customer, but one of the leading miners at the time who could have done it to impress Satoshi Nakamoto.

At the time, Bitcoin was only 17 months old and was gaining prominence among the tech enthusias without any market of sorts. It was a little more than a dream, and to mine a Bitcoin was even easier using just one’s computer. However, Hanyecz was no ordinary miner, he was one of the first people who employed multiple GPU units to increase power and efficiency. This irked Satoshi as it prohibited natural distribution, he knew about the restrictions the network could face if only a few participants are rewarded.

I’m speculating, but it’s entirely possible that a guilt-ridden Laszlo decided to disgorge some of his GPU-mined BTC by making a series of pizza transactions (he is believed to have done it 8 times)

Moreover, according to Carter the timing of the purchase aligns with the eventual boom of the GPU mining space as well.

Today, it might seem like a stupid mistake that cost him millions. However, there is a high chance, that he knew what he was doing and probably had way more than just 10,000 Bitcoins.

At what price in Bitcoin’s history would you have sold the initially mined coins? Please share your views with us.

Original Source: Coin GApe Bitcoin Pizza Day: Man Saw the Future of Those 10,000 BTC and Still, Did it 8 Times?