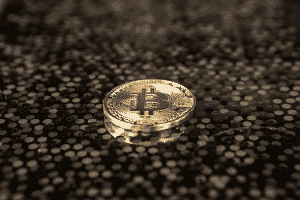 Bitcoin’s three-month realized volatility (RV) and implied volatility (IV) spread is rising to all-time highs after a sharp rise towards $10,000 in the early Asian market hours on May, 8. The wide RV-IV spread signals a possibility of options trading cheaper than expected as the Bitcoin options open interest hit an all-time high of $1.07 billion Thursday.

Are BTC options becoming cheaper or is the spread affected by the ‘Black Thursday’ crash, which saw the three-month realized volatility of BTC options surge by 80% in a day? Well, both make a play at affecting the RV-IV spread as discussed below.

Bitcoin briefly touched the $10,000 mark on Friday morning setting the community in a frenzy of a potential bull run in the coming days. Currently trading just a few dollars short of the milestone, at $9,937, the fundamentals signal a possible continuation of the run. 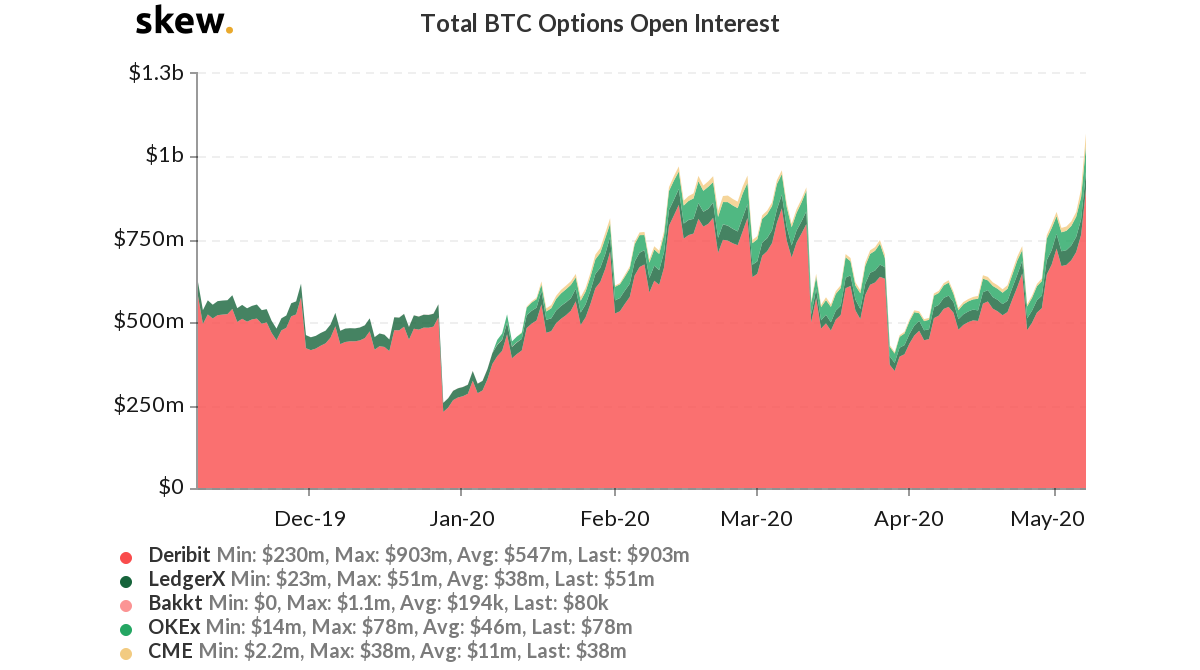 Derivatives are setting record highs in traded volumes and open interest (OI) from both the retail and institutional investors such as CME and Intercontinental Exchange’s, Bakkt. Bitcoin options OI, in particular, set a milestone on May 7 surpassing the billion-dollar mark for daily traded volumes setting an all-time high of $1.07 billion.

The spike in OI and price coincides with the realized/implied volatility spread widening to its highest level since Skew Markets started its records 18 months ago. Could this be a call to purchase BTC options on the cheap?

Bitcoin options look to sell at a discount heading to halving

In simpler terms, options traders usually demand more options (both puts and calls) when the IV drops below the mean or increase in the RV/IV ratio, as it is expected to rise in the future. As volatility spikes, there is more uncertainty in the market hence traders hedging demand spikes. An increase in demand for calls and puts leads to a higher price. 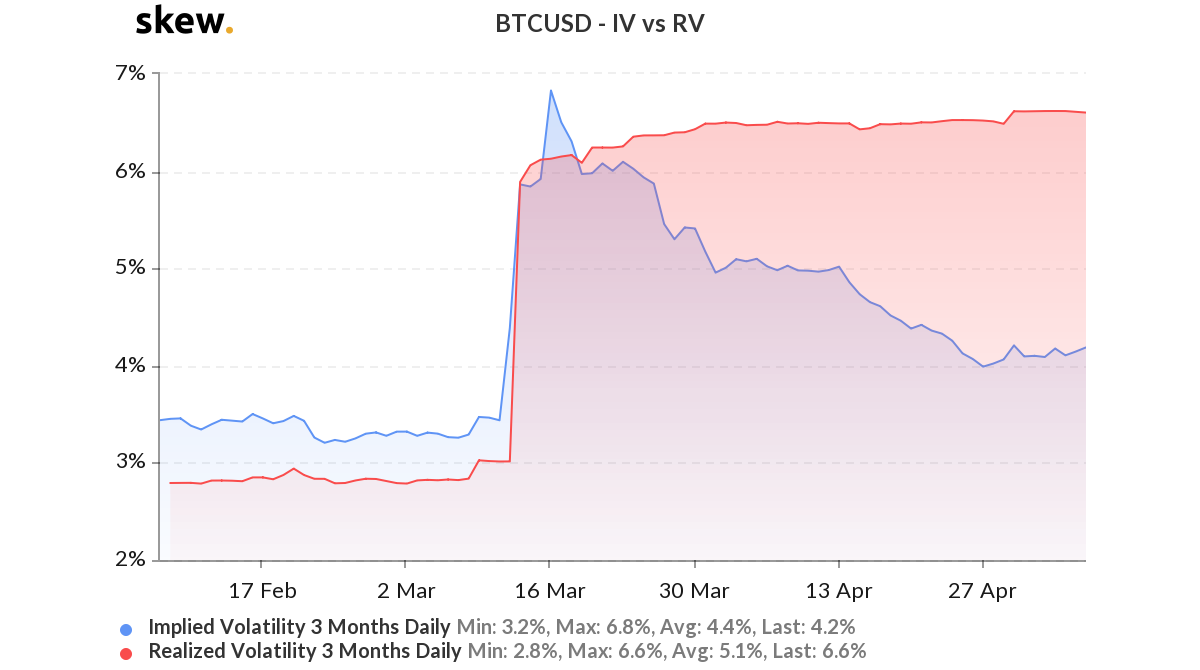 However, if the realized volatility is lower than the implied volatility, investors will sell more options in the hope that the IV will revert to its mean, making the options cheaper.

With the current spread skyrocketing, investors may take this as an indication of cheaper options on the market compared to the historical spreads. However, some traders argue that the current state of the realized vs implied volatility chart spreads is as a result of the March 12 crash that sent BTC to $3,800.

The spike in BTC prices seems to have attracted the bears to the market as the put-call option ratios reached its highest point since the last bull run in June 2019. Currently hovering at 0.81, the put/call ratio sends a selling signal as the demand for puts increases steadily. 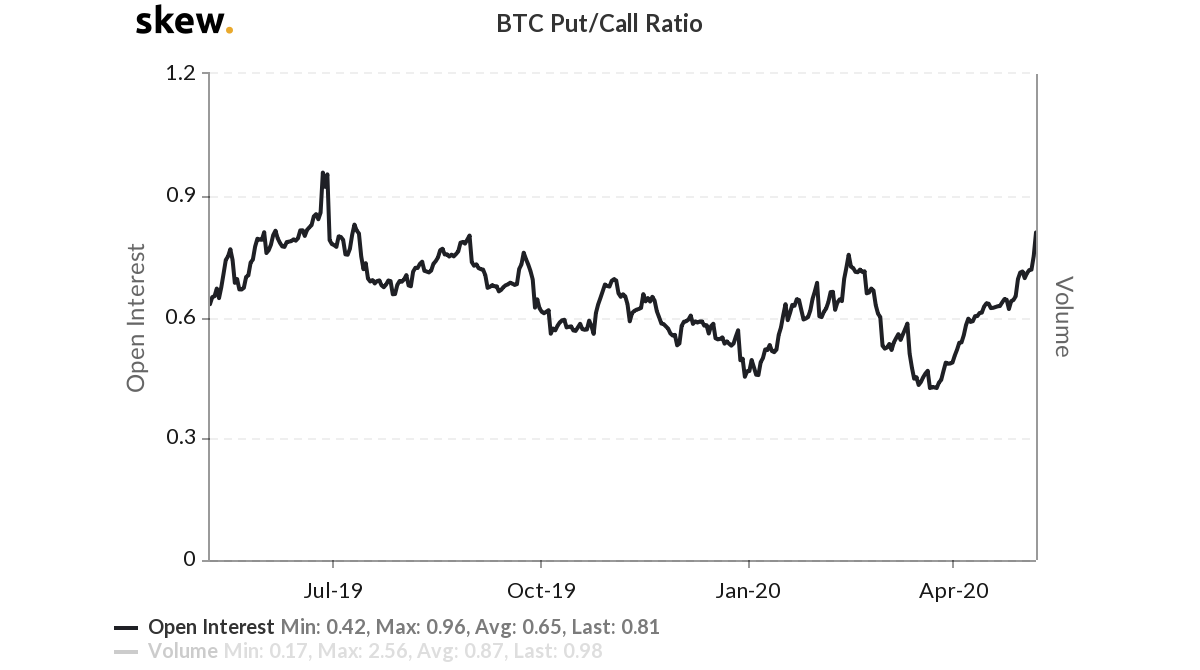 BTC trades at $9,935 as at the time of writing, representing a staggering 165% growth since hitting sub-$4,000 levels in March. Can the bulls survive the current selling indicators to set yearly highs post-halving?

(All in-article images from Skew Markets)