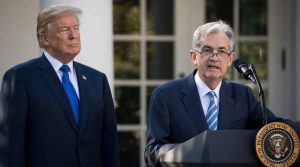 On Sunday, the U.S. Fed Chairman hinted on more ‘BRRR‘ programs, and shunned negative interest rate plans as he shines light on the grim state of the global economy. Nevertheless, his address seems to have a positive result on all asset classes, even the stock markets.

The key highlights of Jemore Powells’ media interview was an estimated rise of 20-25% in the employment rate, and up to 30% reduction in the GDPs across the world. Powell tells 60minutes,

“If we let people be out of work for long periods of time, if we let businesses fail unnecessarily, waves of them, there’ll be longer term damage to the economy. The recovery will be slower. The good news is we can avoid that by providing more support now.”

The interview came with an assurance for greater QE (Quantitative Easing) without negative interest, but ‘more reserve ammo’ from the Feds. Subsequently, Gold makes a new high as hedge against monetary stimulus, and stock markets edge upwards on the hopes on monetary stimulus.

Notice the inverse correlation between BTC price (blue) and SPX index (red) around 13th to 15th May.

Nevertheless, the only positive correlation Bitcoin [BTC] bulls will like to see is with gold. Apart from the U.S. dollar, the pandemic has caused weakness in all the major and minor economies of the world. The depreciation in value of currencies in extreme in the developing and under-developed nations. Gold bug and Bitcoin critic, Peter Schiff tweeted,

The dollar just fell to a new 7 1/2-year low measured in #gold, but continues to depreciate more slowly than other fiat currencies, which are losing value even faster.

Nevertheless, the monetary stimulus has had a positive effect on the stock market since the ‘Black Thursday’ crash in March. Moreover, the reopening of the economy from strict lock-downs across Europe and Asia is reviving faith among businesses as well. Powell added that positive growth can be expected by third quarter, while it could take till the end of year to put things back to as it were.

However, a second wave of the virus, or delay in vaccines could send this recession into a severe depression. There is also a fear of deflationary spiral which could cause another massive drop of proportions equivalent to March.

Which assets do you think will perform best in the current economy? Please share your views with us.