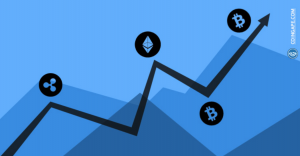 As we close the month of April, the cryptocurrency markets have surged. Led by Bitcoin, the total market cap valuation for the entire market has managed to increase to the $247 billion levels.

This price increase was largely led by Bitocin being able to surge by 22% over the last week as it broke the resistance at $8,000 and continued above $9,000 today. It has since dropped beneath $9,000 but we can expect this bullish rally to continue over the next few days as the BTC block halving event is just 12 days away.

With the upcoming block halving, we will see the block reward being slashed from 12.5 BTC per block to 6.25 BTC per block, effectively reducing the incoming supply to circulation by 50%.

Today, on the last day of the month, we can see that BTC managed to break further above the $9,000 level and reach as high as $9,400 before rolling over and falling back beneath $9,000.

Bitcoin remains strongly bullish at this time. It would need to drop beneath $7,400 before being considered as bearish.

Ethereum managed to surge by a total of 15% over the past week of trading as the cryptocurrency managed to break above the $180 resistance to reach the $197 level. It stayed here for a few days but went on to climb above $200 and closed at the $218 level (bearish .786 Fib Retracement) yesterday.

Today, we can see that Ethereum spiked higher into $230 but since dropped to trade at $211.

Ethereum is bullish in the short term and would need to drop beneath $200 to turn neutral. It would have to fall beneath $170 to turn bearish.

XRP also managed to increase by 15% this week as the cryptocurrency finally broke above the $0.20 level. The cryptocurrency had been struggling to break above $0.20 since the March market collapse but managed to penetrate above here on Tuesday when it surged past the 100-days EMA at $0.206 and closed at $0.218 (1.272 Fib Extension).

Yesterday, XRP continued higher into the bearish .5 Fib Retracement level at $0.23. In today’s trading session, XRP has dropped lower as it trades at $0.218.

The RSI has dropped from overbought conditions as the bullish momentum is starting to show some signs of weakness.