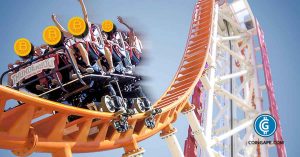 The price of Bitcoin (BTC) dropped below the $9,000 mark for the first time in a week on Thursday as the bulls let off the push to $10,000 USD in the early trading hours in the Ney York session. The sudden drop of BTC/USD to $8,937 USD caused huge liquidations on the BitMEX Bitcoin (XBT) perpetual futures with the market volatility yet again killing off high-risk traders.

Over $80 Million in XBT Longs Liquidated

According to charts provided by Datamish, over $80 million in XBT contracts were liquidated in the past day as the price of BTC dropped to sub-$9,000 levels. As of the time of writing $79.69 million worth of XBT long contracts have been liquidated on BitMEX, with a further ~$1 million in shorts liquidated.

The price of BTC/USD dipped below its support level at $9,400 on Wednesday following the reports of a 40 BTC (~$400,000) move of BTC from an 11-year old wallet. While old transactions (this one having last being spent in Feb 2009) are uncommon, this one seemed to give off a bearish sentiment in the market as the indecisiveness and

May 21st liquidations, so far at $38 million on XBT longs is the third-largest daily volume liquidated since the halving and the market is yet to close.

With the price of XBT futures back above the $9,000 threshold, currently trading at $9,089, and the relative strength index (RSI) cooling off from overbought levels, the current prices may offer a critical accumulation point for the bulls.

Moreover, a successful halving event on May 11, and BTC’s stable price above $9,400 before the sudden Thursday crash, shows strength in the market despite the revenue of miners being cut in half. A breach above the daily charts 20-day Bollinger bands mid-line providing near term resistance at $9,300, will be key to set XBT perpetual futures back on track to $10,000.