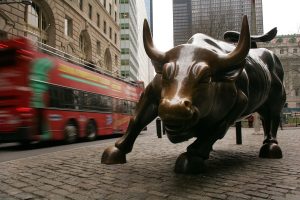 Yesterday, Bitcoin [BTC] gained 13.4% on the spot exchanges as the price a formed high at $8900 on spot exchanges. Moreover, the top also filled a month old CME gap which was recorded on the week of the ‘Black Thursday’ crash.

A derivatives and crypto traders, CryptoFibonacci, noted on about the next gap which was also left unfilled during the previous bull run at $11,795. He tweeted,

Blew right thru resistance, filled a gap and is now getting close to testing another Fib cluster zone. Still another gap close to 12,000 to fill. But, let’s just enjoy this first run for now. #BTC

On a daily scale, the price broke above the 200-Day Moving Average at $7980. In bull trends, the price has had a strong tendency to hold above this indicator. While a $1000+ rise on the daily could have traders looking for a pullback, continuation wouldn’t be a surprise for it’s traders.

Prior to that was June 2017. Higher time frames have looked good

The sentiments of traders are also significantly similar to the March-April 2019 levels. It began with the disbelief of a bullish run as investors were looking for a pullback to $1000. Moreover, in an expectation of a pullback after a swift rise from $3,500 to $6,000, the short orders began compiling which further escalated the price to yearly highs around $14,000.

Currently, given the COVID-19 crisis, since March traders have been expected an escape from the risk asset after the swift fall in the stock and crypto markets. However, neither have have turned in favor of the bears.

The correlation with Bitcoin [BTC] price is still at 0.45, and a continued uptrend in the stock market is likely to favor Bitcoin bulls as well.

Do you think that we witness another parabolic run? Please share your views with us.