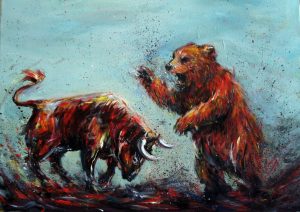 Bitcoin’s [BTC] volatility took strong bearish steps as price broke down below $7,000. The carnage stretched over two days with an $800 drop in price.

Again, Chain was held responsible for acting as the catalyst. China’s crackdown on illegal cryptocurrency exchanges has begun a sell-off characterized by a ‘falling-knife,’ one of the worst bear patterns.

Nevertheless, the price made a swift recovery from the bottom as buyers stepped it. Leading analysts like Tone Vays and Sawcuhteez indicated a bottom formation according to sequential analysis. Sawcruhteez tweeted,

4h red 9 + dragonfly doji makes this look like a good opportunity to take some profit on shorts. $BTC

A ‘dragonfly Doji’ suggests a reversal of the bears and the beginning of a bull action. However, Bitcoin needs to hold above the Fibonacci retracement levels around $7270 to initiate a bullish action.

The order book of the derivates can also confirm the possible reversal. The total long interest across top exchanges like BitMEX, Bitfinex, and Binance is 59%. However, the funding and premium rate is negative at BitMEX.

On Okex, while the top 100 traders are holding a long position with 55% strength, the negative basis points indicate bulls might still be scared.

Leading chart expert Peter Brandt seems to categorize the historic surge as a ‘dead-cat bounce.’ The dead cat in the context being Bitcoin. It seems to have opened up a lot of shorting opportunities.

Moreover, what looks like the end of shorting opportunities could be the beginning, according to Brandt. The bearish trendline has actively played out, exhibiting a dead cat bounce. Hence, BTC price could likely break down below the trend as well. The support from the trendline is ranging from $6800-$6100 for the rest of the year.

Do you think bulls will start to make a move or disappear completely? Please share your views with us.