‘Bitcoin [BTC] is Starting to be a Macro Trade’, says Financial Analyst 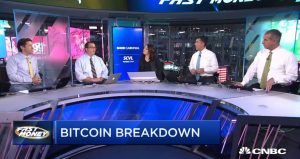 Bitcoin [BTC] price dips to $6515 on Monday as the short-selling accelerated towards the end of the weekend. While the price has bounced back above $7000, the market players continue to be increasingly concerned.

The fear and greed index of Bitcoin drops to 17 from around 40 over the weekend. This is indicative of extreme fear levels witnessed during Q1 of 2019.

Nevertheless, a leading group of analysts on CNBC seems to be bullish on Bitcoin. According to Brian Kelly, the global macro trend and China’s crackdown is affecting the price. However, he sees organic growth in investments, and macro players are strongly inclined towards Bitcoin. He added,

The optimism around the trade situation between China and the US is fuelling the growth of the economy. The two leading global economies expect to establish the Phase 1 trade deal by the end of this year. Hence, the need for hard assets and ‘safe haven’ is likely falling.

Gold and silver prices reflect the downtrend; the yellow metal has fallen 6.8% from its high in September. Correspondingly, BTC also recorded its yearly high during the same time at around $14,000. However, the magnitude of rising and fall in Bitcoin way higher compared to gold. Bitcoin has fallen 53% from its top.

The growth of the stock markets and the projected increase in the GDP of leading economies project a state of growth. Moreover, the feds have also put a stop to lowering rates and are not expected to alter them for a long time.

Furthermore, Brian Kelly also notes the fundamental growth in the no. of  Bitcoin addresses. In an attempt to educate the crowd on the network effect and its fundamentals, he draws a parallel with the increasing user base of companies like Facebook and Twitter.

Do you think that the sell-off has reached its cooling point, or there is more strength to it? Please share your views with us.

The post ‘Bitcoin [BTC] is Starting to be a Macro Trade’, says Financial Analyst appeared first on Coingape.