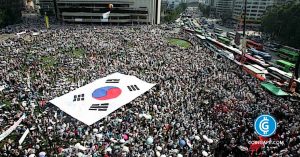 Bitcoin (BTC) gained 3% in the past day to set an intraday high price of $9,155 USD following reports that the South Korean parliament passed a law legalizing cryptocurrencies in the country. No official reports have been released yet but BTC bulls are showing rage in the market, pushing along the rest of the market up too.

Could the recent positive regulation news of cryptocurrency industry set BTC’s price back to par-$10,000 level before the halving?

On Wednesday this week, unofficial reports broke out across the crypto media stream stating the South Korean lawmakers had passed a cryptocurrency bill legalizing the transaction and use of digital assets in the country. With S. Koreans having an affinity to cryptocurrencies and in particular Bitcoin, the market reacted setting the top coin on a $200-dollar uptrend in a couple of hours.

⚡️Just as Bitcoin enters bullish phase of its 4 year cycle:

Could timing be any better?

According to the reports, crypto firms may not be able to utilize the law fully till September 2021 as the law passes a chain of processes to be fully implemented. It’s no doubt however, that the revamp in the blockchain and crypto community in S. Korea will be huge if the bill is signed into law.

Following the news, BTC price pumped past $9,000 USD getting bulls excited about a possibility of retaking the $10,000 level. BTC currently changes hands at $9,055 USD, after a short reversal from its intraday high of $9,155 USD. The coin has performed rather well over the past 24 hours, moving from $8,750 USD at the start of the Asian trading session to current highs.

No bullish reversal signals on BTC/USD, yet…

News of legalization in S. Korea and the recent ban lift on cryptocurrencies by the Indian Supreme Court, are fundamental bullish signals on the crypto market – Bitcoin benefiting hugely. However, the technical charts do not paint such a rosy picture despite a 3% growth in the past day.

Looking at the 4-hour charts, the price of BTC looks set to dip back to sub-$9,000 levels after hitting a brick wall at the $9,200 resistance level. Failing to breach the lower wedge resistance at $9,160 USD further shows a possibility of a price correction towards key support at $8,950 USD, before beginning its journey back to $9,000 USD.