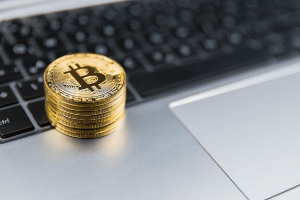 Bitcoin may be up 34 percent year-to-date but this isn’t stopping clients from withdrawing their coins from various exchanges. This is despite hopes from the wider cryptocurrency community that BTC prices, less than a week after halving, will likely edge higher going forward.

Data from GlassNode reveals that over 300,000 BTCs have been withdrawn from several exchanges since the price collapse of Black Thursday.

Balances down >300k BTC (~$3B) since Black Thursday. Lowest balance held on exchanges since May 22, 2019, nearly one year from today. pic.twitter.com/mGofvh8R41

On March 12, the price of Bitcoin fell by roughly 45 percent, temporarily retesting 2020 lows of $3,800 before more than doubling in the run-up of May 11 halving.

However, it is likely that coin holders are apprehensive and are holding their cards close to their chest.

Since BTC has no other use other than finding use as a medium of exchange or a store of value, holders can still benefit from capital gains if they tuck them safely in cold wallets while having full control.

Besides, high profile hacks in the last couple of months have seen exchanges bled as hackers make away with thousands of coins including Bitcoin.

Bitcoin is getting dunked on because @cz_binance did not have the internal resources to make an informed assessment of the hack’s transaction finality.

All of CZ’s blockchain devs are working on Binance Chain, not Bitcoin. pic.twitter.com/lbbU3RBADW

At the same time, it could be the bad experience for traders especially at BitMex where asset prices flash crash that made them withdrawn.

The same might have been expected at Ethereum (ETH), but contrary to expectations, exchanges’ holdings are at their all-time high reflecting confidence in the project regardless of technical hitches that may eventually delay the launch of ETH 2.0 in days ahead.

Data from GlassNode shows that ETH holdings at different exchanges have continued to rise, touching 26 million since Black Thursday.

Besides rapid price changes in the last few days, the Covid-19 lockdowns have forced different investors to consider cryptocurrencies as a source of additional revenue streams.

Those who invested their stimulus checks in BTC, and there are indications that there are some who did, have since registered gains. Reflecting this interest has been the rise of Bitcoin addresses and specifically the sharp rise of individuals owning over 0.1 BTC. In light with this apparent interest from newbies, this observation clashes to what was largely expected from the wider BTC community.

So far, there have been no plausible explanation to the significant drop of BTC held at exchanges.