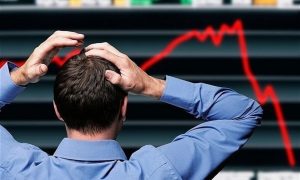 The price of Bitcoin (BTC) dipped below the $8,700 mark during the early hours in the Asian market on Monday for the first time since the halving event. According to TradingView, XBT Bitcoin futures currently trade at $8,773 representing a 6.5% drop in the past 24 hours, as the sharp uptrend since Mar. 12 comes to an end.

The sharp drop in Bitcoin’s price in the past hour from highs of $9,100 set off over $20 million in XBT long contracts liquidations in an hour and $30 million in the past day.

Some crypto traders and analysts are seeing this as a precursor to the price further retracing towards the $8,500 region. Despite the near term bearish market indicators, BTC/USD long term fundamentals remain solid with spiking open interest in CME Bitcoin futures and increased institutional investment as reported by Grayscale Investments.

While the price of BTC has exploded over 150% since the “Black Thursday” crash, the overall outlook on the price is negative since the June 2019 highs of $13,800. One analyst noted a very bearish trend on the daily BTC/USD charts with the price-setting lower highs and lower lows. Despite testing the resistance levels on several occasions, BTC/USD is yet to set a higher high since the Q2 2019 bullish run.

Doesnt look too good. Really interesting to me how we haven't taken out any of those highs considering how close price got to them. Reminds me how clean the LHs were following the 20k top. Until we get a HH, good idea to short near the highs/take profit on longs pic.twitter.com/O4umPqE7ZD

Notwithstanding, the near-term technical indicators also give a bearish outlook with the relative strength index (RSI) oscillating towards the oversold levels, the formation of a death cross, and the price dipping below the bearish flag pattern support level. A breach below the $8,500 support may open up a bloodbath towards the $8,100 major support level.