Bitcoin Briefly Breaks Out Above $11,000 but Cannot Sustain Higher Prices

The Bitcoin (BTC) price reached a high above $11,100, purportedly breaking out from the current pattern, but was rejected by an important Fib level and has been decreasing since.

Technical indicators have begun to move upwards, but have not confirmed a reversal yet. While the MACD and RSI are increasing, the latter is possibly facing resistance at the 50-line. In addition, the Stochastic Oscillator has begun to move upwards but has not made a bullish cross yet.

If the price were to reclaim the $11,1200 level, it would be a strong confirmation sign for the upward trend, especially if the aforementioned technical indicators turn bullish.

The shorter-term chart shows that the price is trading inside a parallel ascending channel. Movement contained within parallel lines is more often than not corrective.

On Sept 16, the aforementioned high caused a deviation above the resistance line of the channel, which was immediately followed by a decrease back below it.

There is a bearish divergence in the 2-hour RSI, and the MACD has begun to decrease.

The support line of the channel is currently near $10,600.

There are two main support levels where the price might retrace to. If the entire move is not complete, we would expect a minor correction between the 0.5-0.618 Fib levels at $10,550-$10,660. This would be almost right at the support line of the channel, indicating that the correction is minor and the upward move will continue.

If the entire move is complete, then a deeper retracement will likely follow, In this case, the $10,312-$10,436 level would be more likely to initiate a reversal.

If neither of the levels manages to initiate a bounce, the price is likely to continue heading to test the range lows. 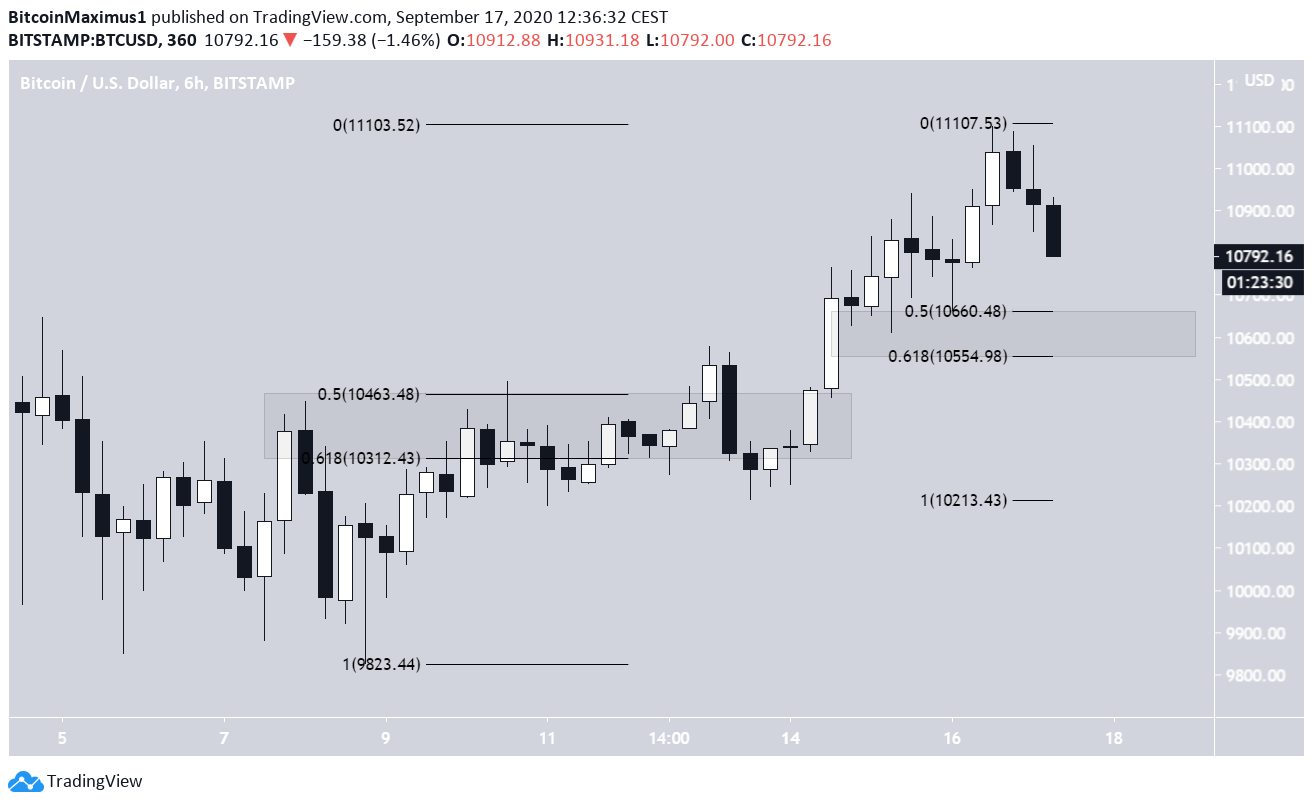 There are two possible wave counts for what is currently transpiring:

Up to this point, it was more likely that the price was in wave 4. However, the wave has extended a little too much. While it is still valid as a possible wave 4 (in orange below), it is flirting with the limits of how high wave 4s typically go.

If this count is correct, the price is expected to make another lower-low relative to that from Sept8.

The alternative wave count suggests that the price completed its downward move on Sept 8 and has now begun a new bullish impulse.

However, both counts indicate a corrective movement is due, in line with short-term technical indicators. Whether the price manages to bounce near the $10,300-$10,550 area will be very helpful in confirming whether this is still a correction or the beginning of a new upward move.

To conclude, the Bitcoin price has begun to show short-term weakness and is expected to retrace towards $10,300-$10,550. The reaction once the price gets there will be helpful in determining whether the price will reach a new low or if it has begun a new upward movement.

The post Bitcoin Briefly Breaks Out Above $11,000 but Cannot Sustain Higher Prices appeared first on BeInCrypto.