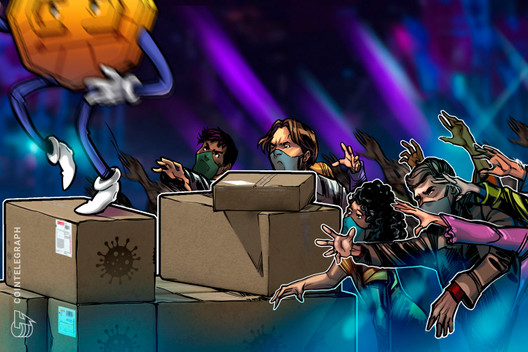 The Bank for International Settlements expects the COVID-19 crisis’ impact on retail payments to have a positive effect on central bank digital currency development.

The Bank for International Settlements (BIS) expects the COVID-19 crisis’ impact on retail payments to have a knock-on effect on the development of central bank digital currencies (CBDC).

The BIS is an organization based in Switzerland made up of 60 of the world’s central banks, and has previously released a number of major reports focused on both decentralized cryptocurrencies and CBDCs. As distinct from cryptocurrencies, CBDCs are digital currencies issued by a central bank, whose legal tender status depends on government regulation or law.

BIS’ latest report, published on June 24, notes that the COVID-19 pandemic has incurred far-reaching changes in retail payments, revealing both the strengths and weaknesses of existing systems.

First, the report points to the sharp decline in cash payments due to merchant and consumer concerns over viral transmission. Economic uncertainty has also triggered “precautionary holdings” of cash, leading to a decline in daily cash transactions.

In parallel, restriction measures imposed by national governments, such as the closure of physical stores, has led to a surge in e-commerce payments. Decreased mobility has triggered a decline in cross-border visa transactions as well as a steep drop in migrants’ remittances.

All these changes, BIS argues, reveal both the advantages and the drawbacks of existing payments systems. On the one hand, digital payments have enabled many economic activities to continue despite major disruptions to daily life.

On the other, existing inequalities between social groups have become starker during the crisis, in part due to uneven levels of financial inclusion, which can adversely affect individuals’ access to government relief:

“The crisis has amplified calls for greater access to digital payments by vulnerable groups and for more inclusive, lower-cost payment services going forward.”

In this context, the report notes that the issuance of CBDCs is “at the frontier of policy opportunities” for central banks and “could amount to a sea change.”

The report takes pains to separate the aims and approach to any future CBDC from the private sector landscape, arguing:

“CBDC issuance is not so much a reaction to cryptocurrencies and private sector “stablecoin” proposals, but rather a focused technological effort by central banks to pursue several public policy objectives at once.”

A successful CBDC, BIS argues, could offer “a new, safe, trusted and widely accessible digital means of payment.” The report analyses the two versions of CBDC, both wholesale (institutional) and retail (accessible to the public), weighing up their potential benefits and risks.

Notably, the coronavirus crisis has come at a time in which both central banks and policymakers are becoming increasingly positive about the potential benefits of CBDCs, in both their wholesale and retail forms.

BIS includes data on the rise in central bank communications about the subject, which has become both more prevalent and positive in the past couple of years: 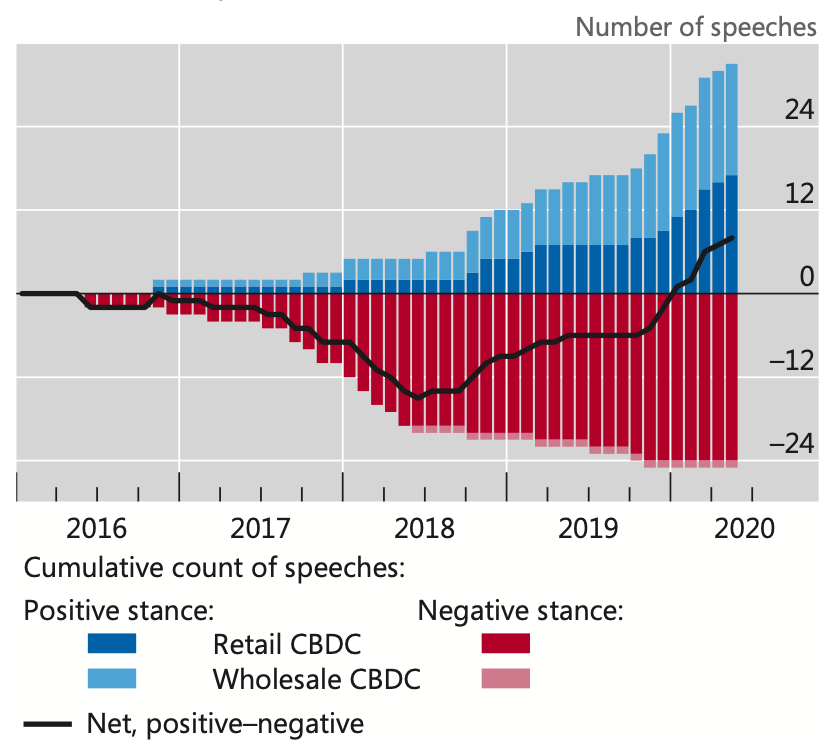 In conclusion, the BIS says it will continue to closely support central banks worldwide in their CBDC research and design efforts. The institution has called for more international coordination to ensure that, post-crisis, future changes in global payments will be less fragmented, more inclusive and more efficient than they have been in the past.