In anticipation of Beam’s soon-to-come hard fork, the team behind the project updated a number of relevant specifications, paving the way to the so-called “Confidential Defi,” Beam announced to Cointelegraph on June 24.

Beam CAs are part of Eager Electron 5.0 — a network upgrade meant to provide the key infrastructure for building Confidential DeFi applications. CAs will enable a number of use cases and can be linked to anything from cryptos like Bitcoin (BTC) to traditional commodities like gold, stocks, and bonds, the firm said.

Beam CAs encompass major privacy features like the ability to unlink transaction history and send assets using non-interactive transactions. Beam CAs can be issued by anyone by locking 3,000 beams, or about $1,400 as of press time.

Alongside Confidential Assets, Beam’s upcoming hard fork will also expand the Beam DEX on the already available atomic swaps, which will come out of beta. CAs will be immediately swappable with cryptos like BTC, Litecoin (LTC), BEAM and QTUM.

Gus Sullivan, community lead at Beam, noted that the upcoming fork makes Beam both a privacy coin, and a private DeFi ecosystem.

Beam announced the upcoming hard fork back in April. Though the company did not explicitly say that the hard fork would relate to DeFi, Beam CTO Alex Romanov had spoken about the firm’s progress with Beam back in February 2020.

Beam’s move to DeFi comes amid sharp growth in the DeFi ecosystem. Since mid-June, the value locked in DeFi skyrocketed nearly 80%, jumping from about $900 million to all-time high of $1.6 billion as of press time. 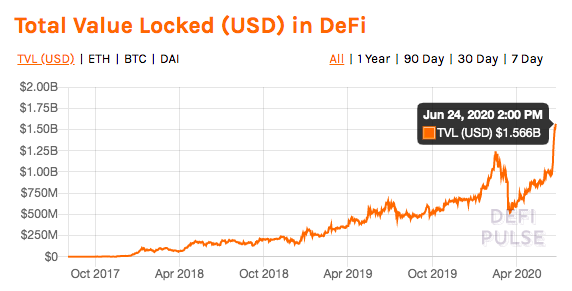 Earlier in April, Cointelegraph reported on another privacy-focused DeFi project. The Incognito privacy project promises to allow users to privately use DeFi platforms without ever touching Ethereum.