DeFi project Balancer has hastily conducted a community vote to determine how to limit attempts to exploit the protocol’s token reward system.

Following the meteoric launch of Balancer Labs’ governance token, the decentralized finance (DeFi) protocol has quickly implemented changes to limit large players from exploiting the platform to mine BAL tokens, rather than for crypto asset trading.

On June 25, Twitter user ‘Predictions Exchange’ reported that the crypto derivatives exchange FTX was “gaming” BAL’s issuance, estimating that the platform was “on pace to receive > 50% of this week’s distribution.”

In response to the apparent gaming of the system Balancer Labs launched a community vote on its Discord platform, with discussions concluding that “a whitelist of eligible tokens will be implemented” to restrict distributions moving forward.

The team tweeted that the move would address “attempts to game the distribution process” while ensuring that changes to the mining rules are not retrospective in nature.

Balancer’s vote and fix have been criticized by Sam Bankman-Fried, the founder and CEO of FTX, who asserted that the vote undermined the governance of the Balancer’s protocol through its BAL token, resulting in “a generic person-driven decision making system.”

He also warned that “making any on the fly modifications” is “dangerous for a DeFI project,” asserting that “DeFi is all about creating permissionless systems that aren’t at the mercy of people’s whims.”

“That’s part of what makes DeFi so hard to do well: if you decide you want to change something, often you can’t, or are restricted in how,” he added.

Protocols must adapt to survive

Kain Warwick, the founder of DeFi platform Synthetix, tweeted that “every single incentive Synthetix has designed has been gamed in some way … it’s why we do small scale trials then iterate.”

Ultimately, Warwick predicts that the attack will prove to be “good long term for Balancer provided they don’t retroactively change rules and don’t make a knee jerk move that is detrimental.”

“The best way to view these sort of attacks is as a bounty to improve and upgrade your protocol. These things happening now means that you are able to patch it so that a bigger, scarier, more extreme version which might have a significant impact, does not happen in the future.”

After BAL tokens launched on the Ethereum mainnet yesterday, the market has seen extreme volatility, rallying from $6.65 to $22.28, before slipping back to $13.41 as of this writing. 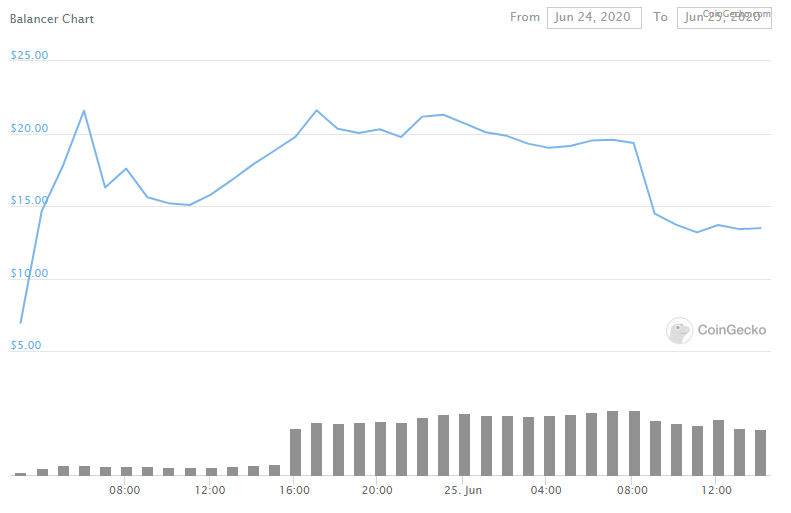 While the Balancer’s governance token currently ranks as the 88th-largest crypto asset, DeFiMarketCap estimates that BAL is the second-largest DeFI token by market cap based on total supply.

The value of assets locked in Balancer also spiked by nearly 50% over the past day, currently ranking as the fifth-largest DeFi protocol with $81.8 million in locked funds according to DeFi Pulse.