In a Jan. 27 blog post, Independent Reserve, Australia’s largest digital asset exchange, announced that it would be delisting Bitcoin SV on March 28.

All BSV trading will cease and open orders will be canceled on that day, but exchange users will be given a six-month grace period to withdraw their funds.

Bitcoin SV, or Satoshi’s Vision, is one of the biggest cryptocurrencies on the market in terms of market cap. The origin of BSV goes back to 2017 when a Bitcoin hardfork created Bitcoin Cash. The following year Bitcoin Cash itself had a hardfork, creating Bitcoin SV.

The reasoning behind the development of BSV is tied to the long-standing scaling debate in the crypto community. BSV increased its block size to 128 MB in order to fulfill what was laid out in the original Bitcoin whitepaper.

Despite its market position, BSV has found itself at the center of one controversy after another since its birth. This has been mostly due to the involvement of Craig Wright, the notorious Australian developer who claims to be Satoshi Nakamoto.

In 2019, Wright’s behavior led to the delisting of BSV from many prominent crypto exchanges. At the time, Wright was lashing out on Twitter against those who were questioning his claims of being Satoshi.

Allegedly, Wright went as far as offering a bounty on the identity of one user who had accused him of lying. The resulting backlash was swift and came in the form of delistings and industry figures condemning Wright.

Binance CEO Changpeng Zhao, after removing BSV from his exchange, tweeted out that Wright was a fraud: 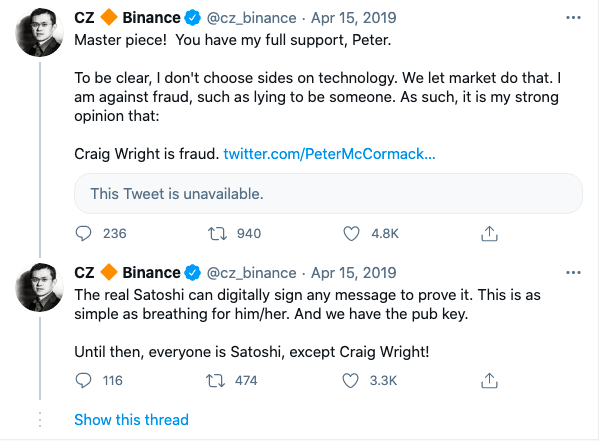 BSV had not been in the news as much lately, and even started the year with a huge upward price swing, peaking at $305.57. But Independent Reserve cited recent events as the cause behind the delisting, apparently referring to Wright’s attempts to force those hosting the Bitcoin whitepaper to take it down.

Wright was controversially granted a copyright claim on the Bitcoin whitepaper and has subsequently used allegations of copyright infringement to try and force sites like bitcoin.org and bitcoin.com to take it down.

At the time of press, the price of Bitcoin SV had dropped back to $165. This marks a 61% loss since its all-time high of $423 almost exactly one year ago.