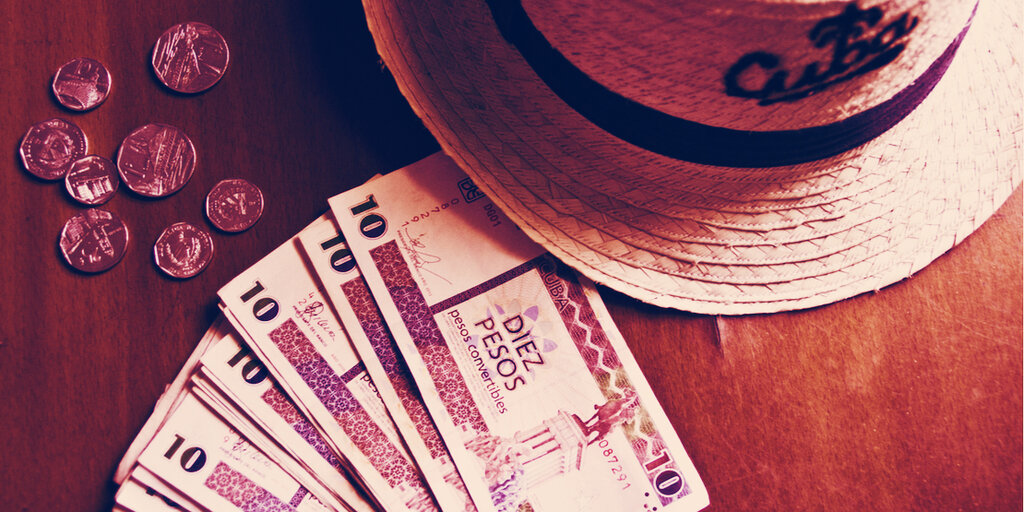 After this weekend, Americans will no longer be able to transfer money to Cuba via Western Union.

The money transfer service, which dominates the remittance industry with a market cap of nearly $9 billion, says it is pulling services due to US sanctions against Cuba’s communist government.

Western Union doesn’t need to serve Cuba in order to stay successful. After all, MoneyGram has done just fine without the Cuban market. But Cubans still need a way to receive money from abroad. Therefore, pardon the cliche, but Bitcoin just might fix this.

How Cubans Are Using Bitcoin to Skirt US Trade Embargo

According to a 2020 Florida International University study, an estimated total of $2-4 billion per year is sent from the US to Cuba via a mix of formal and informal channels. Since almost half of Cuban American families send money to relatives in Cuba, there’s strong evidence that these cash injections play an important role in the Cuban economy.

But US-Cuba remittances have been under threat since President Trump took office in 2017.

In a bid to up the pressure on Cuba’s communist government, the Trump administration reversed several Obama-era moves to normalize relations with Cuba. In September 2019, the US Treasury Department forbade remittances to Cuban government officials so that US dollars couldn’t go toward “enriching Cuban regime insiders and their families.” It also limited the size and frequency of remittances to family members.

“For more than 20 years, Western Union has been moving money to Cuba on behalf of our customers to family and loved ones to pay for food, rent, and other expenses including micro-businesses,” it said in a statement. “We sincerely regret this situation and its impact on our customers.”

While it didn’t provide specifics on how substantial the Cuban market is for Western Union, it’s likely the company doesn’t need the regulatory hassle that comes with serving the communist-run island—just as companies have avoided doing business in Venezuela, due to sanctions against specific figures and organizations linked to Nicolás Maduro’s government.

US Government to Use USDC Stablecoin to Bypass Venezuela’s Maduro

Alejandro Machado, co-founder of the Open Money Initiative, told Decrypt, “If the bloodline of a business isn’t to provide services to Venezuelans, lawyers often advise to stay clear of Venezuela to avoid trouble—and firms like Western Union don’t necessarily have the risk appetite to serve a country like Cuba.”

Machado pointed to Paxful, which left Venezuela in September: “They have booming biz in many countries [and] don’t need Venezuela to sustain themselves, so they likely took their lawyer’s advice and pulled out.”

Boaz Sobrado, a data analyst and founder of tourism site WhyNotCuba.com, laid out to Decrypt the scenario for Cuba, which faces some of the same economic problems as Venezuela.

“Basically, the following is happening. Cuba is experiencing the double whammy of sanctions and high levels of inflation,” he said. “The two main avenues for hard currency to enter the country, tourism and remittances, are shut off due to sanctions and COVID.”

That provides an opening for Bitcoin. Sobrado relayed what he sees as increased interest in peer-to-peer Bitcoin exchanges: “The order size for bids and sells has grown massively in the Telegram channels.” Whereas selling 1 BTC a day would have been a stretch just last year, he said, “now people sell 12 easily.”

Sobrado said services like Bitremesas, a crypto exchange established for remittances that doesn’t require Cuban recipients to have a bank account—have popped up for Cubans to get around sanctions, as have informal remittance shops where people can trade BTC and foreign fiat for Cuban currency.

Without competition from the usual money transfer suspects—PayPal, Stripe, and Square don’t send to Cuba—such crypto operations have less competition. But, for now, it’ll have to be local. The same reasons that forced Western Union out of Cuba are also keeping international firms like Paxful from settling there.

In the meantime, there’s still time to send via Western Union. The last day to send money to Cuba is November 22, and it must be picked up by November 23.