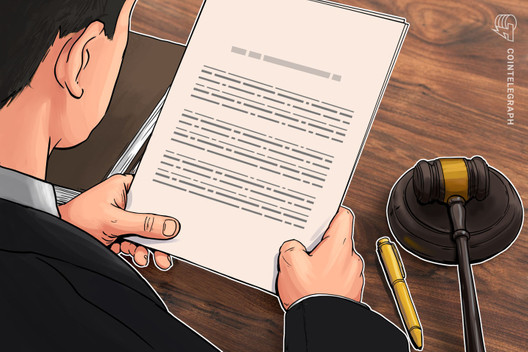 Filed this morning, the second class action against block.one estimates that U.S. investors made up $200 million of the EOS ICO, in violation of securities law.

Per a May 18 complaint, more investors are looking to recoup funds invested in the record-breaking initial coin offering for EOS — which netted a total of $4 billion in cryptocurrency. Lawyers for the plaintiffs are calling over $200 million of that money illegally raised.

The complaint alleges that EOS was an unregistered security offering by block.one. Block.one is the development firm that spearheaded the ICO for EOS, which many saw as a form of investment in the company.

Language in the purchase agreements in EOS’s pre-sale told investors in the United States not to participate in the fundraising round. This was an effort to avoid conflict with the Securities and Exchange Commission (SEC). Block.one did not register the offering in the U.S., neither as a security nor under exemptions from securities registration, so they leaned on their measures to skip out on U.S. investors entirely as their means of compliance with the U.S. regulator.

However, some U.S. investors indeed participated in the ICO, and block.one ended up encountering the SEC anyway. In September, block.one settled with the commission for $24 million.

The new complaint alleges that the firm — which has offices in Hong Kong and Blacksburg, Virginia — knowingly and deliberately sought U.S. investors:

“From 2017 through the present, to drive demand for EOS Securities, Defendants have aggressively courted investors throughout the United States. Block.one first announced itself at a May 2017 conference in New York City, and punctuated its arrival with expensive ad space on a Times Square billboard.”

On the subject of how much investment actually came from the U.S., James Koutoulas, one of the lawyers for the plaintiffs, told Cointelegraph that they were “estimating bare minimum 200M in US losses.”

The complaint further dismisses block.one’s claims to be working towards decentralization as falsehoods.

However, that does not seem to be the end of the story. Early in April, law firm Roche Cyrulnik Freedman filed a rash of class-action suits against a number of crypto firms including block.one, based on similar allegations. The two cases will likely have to compete to be appointed lead counsel — effectively, leadership over the class.

Cointelegraph reached out to block.one’s legal team but had received no response as of press time. This article will be updated if a response comes in.