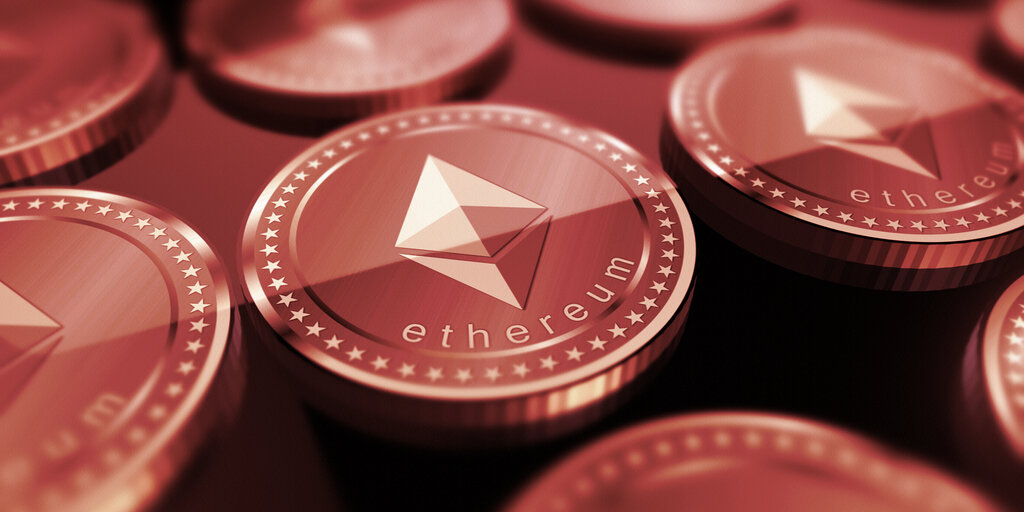 Some hefty whales have been detected in the waters of the Ethereum blockchain.

The Ethereum balance on top-tier crypto exchanges reached a 15-month low of 15.4 million ETH  ($20.5 billion) according to a tweet from crypto analytics team Glassnode on Saturday 23.

The exodus started on Tuesday, when there was 16.6 million ETH held in exchanges, meaning that $1.6 billion has left exchanges. The Whale Alert Twitter account, a bot that tracks large crypto transactions, reported that much of it shifted from major crypto exchanges to anonymous wallets.

But where’s it gone and what caused the exodus?

What caused the ETH exodus? An analyst explains

Pedro Febrero, an analyst at Quantum Economics, told Decrypt that there could be three reasons that explain why so much ETH was drained from exchanges.

First, “Ethereum has returned to being locked in DeFi,” said Febrero, in reference to crypto staked in decentralized finance smart contracts. DeFi refers to the budding industry of decentralized lending protocols, exchanges and synthetic derivative protocols.

However, this one doesn’t check out. According to DeFi Pulse, a site that tracks the amount of crypto locked in smart contracts, The amount of ETH locked in DeFi actually decreased from 7 million ETH on Tuesday to 6.9 million the next day, and then back again to 7 million. At best, this explains 0.1 million ETH, assuming that DeFi Pulse’s data is correct and that the extra 0.1 million ETH game from these exchanges. So what about the rest?

Febrero’s next best guess: “The number of ETH locked in the beacon chain (PoS) grew by more than 320% since December 2020.” Febrero, here, is talking about ETH locked up in the smart contracts for ETH2.0, the next generation upgrade to the Ethereum blockchain. People stake money in ETH2.0 to protect the network and earn staking rewards on their deposits. And bingo! The stats check out. On January 19, 170,000 ETH was staked in ETH2.0, and then another 200,000 ETH on Wednesday. That could account for about a third of the missing ETH, but not all. And while ETH2.0 stakers had cooled off by Thursday, ETH kept on draining.

Febrero’s third crack? “Institutional investors and smart money, like Grayscale investors, are accumulating Ethereum,” he said, citing one of Decrypt’s own articles (now he’s talking). But according to metrics site BYBT, Grayscale hasn’t been buying any more ETH for its publicly-traded trusts. So where’s all the ETH going? Private investors, HODLers and investors may explain the locations of the rest of the mystery coins.

But where the ETH has gone is of secondary importance when compared with the fact that it has left exchanges, explained Febrero. “In our opinion, we think this means the price of ether has a greater chance of moving up. The less ether is available at exchanges, the more likely is the price to rise,” he said. Hooray!