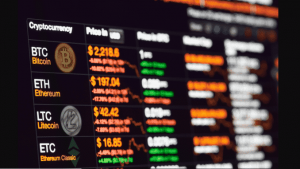 Altcoins are on a short slump against Bitcoin (BTC) at the moment despite gaining ground against the top cryptocurrency in the past few weeks. According to sampled crypto trading analysts, the altseason could be fast approaching as BTC further slumps below $8,000, setting a run downwards towards $7,500 support level.

Across the top 10 cryptocurrencies, only Litecoin (LTC), Bitcoin SV (BSV) –both which have a very high correlation to BTC’s market sentiments – and Binance Coin (BNB) lost significantly against the dollar in the past 24 hours.

Looking at the charts, altcoins have had a smooth run against Bitcoin (BTC) since the start of Q4 as seen at the right end tail of the chart below. The unrelenting surge in altcoin value against BTC since September has finally confirmed the bottom for the second fiddle cryptocurrencies against their emperor, BTC.

Luke Martin, a crypto trading analyst and host on Coinist Podcast, explains that the long bear run across the altcoin market has effectively ended given the vast number of coins showing signals of pulling out of a 6-month downtrend.

“Alts collectively started trending down vs $BTC around April 1st when $BTC broke above $4,000 USD,” Luke wrote on Twitter.

Furthermore, taking four random coins across the top 100 tokens (except the top 10 coins) in market cap, Martin shows a similarity in the overall trend in altcoins against BTC.

Alts collectively started trending down vs $BTC around April 1st when $BTC broke above $4,000.

I marked April 1st on the chart for 4 random alts.

You can see the downtrends on all of them have stopped, for now.

Cycle lows put in around Sept-October.

Worth keeping an eye on! pic.twitter.com/pg191AmjyD

Looking at the correlation charts across the top 10 cryptocurrencies (including BTC), the sharp dip in correlation, to 55% in September and to 59% at the end of October, following BTC’s sharp rises , is quickly weaning off.

Currently at 73.6%, the altcoin movement targets highs last recorded in August which may be good news for the altcoin market. The high correlation across altcoins as technical indicators show a possible uptrend – a pleasing signs for alt bag holders.

An Incoming $28 Billion Boost in Altcoins?

According to a tweet shared on Nov. 12 by Rekt Capital, a featured trader on Forbes, the alt season is in play as coins experience the never-ending Q4 hype cycle once again.

The altseason hype is currently gaining heat as investors dump their satoshis to grab some alt bags. Crypto Bombshell on Twitter predicts a possible $28 billion dollar boost in the altcoin market before the end of the year, asking investors to select the right alts to grow their crypto bags.

I think we're about to see a $20billion increase in the entire altcoin marketcap. Thats a 28% increase across all your favorite cryptocurrencies. Those with positive FA and TA set ups will yield better returns. Plan wisely. pic.twitter.com/oAty5dSwkq

An inverted head and shoulders patters is forming on the total altcoin market cap charts signaling a possible bullish run in the market before 2020 kicks in.