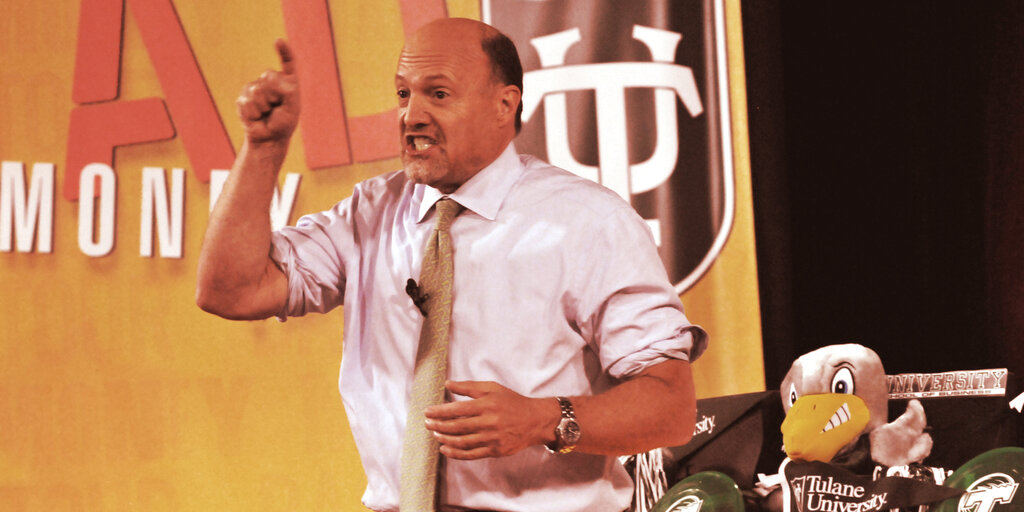 MicroStrategy CEO Michael Saylor recently predicted that there will be an “avalanche of companies” adding Bitcoin to their balance sheets, and Tesla’s announcement yesterday of a $1.5 billion purchase lent credence to that idea. Now CNBC’s Jim Cramer suggests it would be a bad idea for businesses to not also get onboard with Bitcoin.

Cramer, the host of the network’s “Mad Money” and founder of TheStreet.com, appeared on CNBC’s “Squawk Box” show this morning to share his views on businesses buying up Bitcoin as a reserve asset rather than holding onto fiat currency.

“As far as a way to have a pastiche of things you should do your cash with, I’m all for it. I think it’s almost irresponsible not to include it,” he said. “Every treasurer should be going to their boards of directors and saying, ‘Should we put a small portion of our cash in Bitcoin?’ It seems to be an interesting way to hedge against the rest of the environment. [It’s a] nice hedge against fiat currency.”

"Every treasurer should be going to boards of directors and saying should we put a small portion of our cash in #bitcoin," says @JimCramer. "Nice hedge against fiat currency." #btc pic.twitter.com/S65wbNzCxp

Cramer tempered his advice, saying that he doesn’t believe that “companies should invest big” in Bitcoin and that it should only be a “piece of the puzzle.” He called himself more “traditional” in terms of hedge options, such as buying gold or selling calls against stock, but still advised that Bitcoin should be part of a mix of assets for companies.

“I happen to think that Bitcoin is exciting. It’s something that we can talk about endlessly. There are promoters of it; there don’t seem to be a lot of sellers of it. We’re gonna hear from PayPal in an analysts’ meeting coming up about how it’s begun to be mainstream,” he said. “I just think that in the end, you need to have some kind of hedge on it, because if you take it and it goes down, I think that you’re going to end up saying, ‘Why did I use Bitcoin when I could actually transact in dollars?’”

Tesla’s $1.5 billion Bitcoin purchase spurred a nearly 20% jump in the price of Bitcoin yesterday, setting a new all-time high above $48,000 overnight. Business intelligence firm MicroStrategy was the first notable example of a company investing large amounts of money into Bitcoin as a reserve asset, starting with a $250 million initial purchase in August 2020.

MicroStrategy has continued to add to that tally since then, spending $1.145 billion total on 71,079 BTC, which is now worth approximately $3.32 billion as of this writing. The firm’s stock price has also multiplied several times over since the initial BTC purchase.

With one of the world’s most valuable companies following suit in Tesla, Cramer is onboard with the idea of more and more firms joining the party. And Cramer himself holds Bitcoin, as he explained back in December. He affirmed that position today during his CNBC appearance.