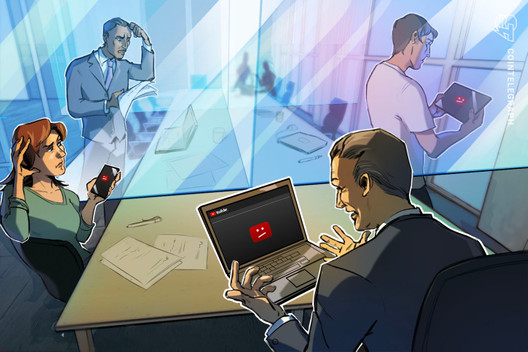 YouTube has banned a number of crypto channels recently, often restoring them shortly after. Adam Charles, senior communications manager for DeFi solution, Kava, said he has been working to help these channels get back online.

Charles stated that he works with multiple Telegram influencer groups to get these YouTube accounts back up. “We have developed a series of motions to cycle through when one’s channel comes under fire,” Charles told Cointelegraph.

“The first of which is to enter one of the Influencer telegram groups and ask if the takedowns are happening to anybody else. If it is, then I try to work with each one individually so that we can find a correlation between the removals.”

Words and phrases can signal bans

Prior to the most recent YouTube drama, combining the key terms Wall Street and COVID resulted in account strikes, Charles said. “On top of that, we’ve hypothesized that if a channel received a strike from March that went uncontested (sometimes YouTubers will just let them sit) then come April channels were being automatically flagged for review,” he explained.

Charles also noted flags sometimes stayed up on YouTuber’s accounts after the company revived their channels, causing immediate subsequent bans from the algorithm upon receipt of just one complaint. This means a single person with a grudge could bring down an account, based on Charles’ comments.

Charles said the YouTube reinstatement journey begins with collaboration among influencers on why the bans occurred, with solution exploration following.

YouTube hosts some enormous channels that generate significant funds, leading to escalated resolution if those accounts have problems and need assistance.

Stated worker shortages amid coronavirus concerns have decreased YouTube operator availability and patience, resulting in uncharted waters for the platform and these issues, Charles explained.

To combat the situation, Charles said he and his influencer groups are putting a “hackathon-type event,” together. The movement includes rounding up a high number of banned YouTubers on a separate video posting site, urging viewers “to constantly clog up” YouTube’s thinly-staffed help group avenues, appealing the return of the influencer channels.

YouTube crypto bans and video strikes have seemingly come in waves, with a large batch beginning near the end of 2019. Recently, multiple high profile YouTubers saw their channels banned entirely, only to see the video platform reinstate them a short time after. Two recent examples include Tone Vays, and Jason Appleton’s Crypto Crow channel.

When asked if Charles worked with him, Appleton told Cointelegraph in an email that he did not quite know what led to his channel’s reestablishment.

“I’ve known Adam for a few years. He’s always eager to help influencers. He sent me a phone number to call and a link to a support chat. Neither were able to help me, but there’s no telling what got this resolved so quickly or what got the attention of Youtube.”

Vays told Cointelegraph via direct message that Charles had also communicated with him. “Adam Charles reached out to me about getting all the banned YouTube creators to stream at the same time as a united movement,” Vays said on Friday, April 17.  “I simply replied saying ‘let’s see what happens on Monday’ as I was pretty sure I was removed by mistake.”

Around the same time that Vays commented to Cointelegraph on April 17, YouTube’s Twitter account confirmed that the channel’s ban was a mistake.

On an unrelated but similar front, Ripple recently filed a lawsuit against YouTube for allowing fraudulent videos to promote XRP giveaways.