Algorand (ALGO) is close to breaking out from the $0.70 resistance area that has been in place since August 2020.

Technical indicators support the possibility of a breakout for both the ALGO-USD and BTC pairs.

The upward move resulting from the March 2020 lows took ALGO to a high of $0.76 on August of the same year. This caused a temporary rejection, but it eventually regained its losses and is now making another attempt at moving higher.

The current local high of $0.70 has marked the highest weekly close for ALGO since August 2019.

Technical indicators are bullish and support the possibility of a breakout. If one occurs, the next closest resistance area would be found at $0.86.

Cryptocurrency trader @Pentosh1 outlined an ALGO chart, stating that he expects a breakout to occur. This aligns with the readings from the weekly time-frame.

The daily chart supports the possibility of a breakout and the continuation of the upward movement after.

Despite the nearly parabolic rate of increase since December 2020, technical indicators are bullish. ALGO has already made several higher highs and lows — signs of a bullish trend.

The two-hour chart shows a breakout and retest of the $0.62 level, which is a strong sign of continuation.

Short-term indicators are also bullish, aligning with those from the weekly and daily time-frames.

The wave count suggests that ALGO is in an extended third wave of a bullish impulse (shown in white below) that began with the October 2020 lows. The formation is created by the 1-2/1-2 wave count at the beginning of 2021.

The most likely target for the top of this wave is found between $1.12-$1.22. These targets were found using Fib extensions on wave one and sub-wave one.

The sub-wave count is shown in orange:

Similar to the ALGO/USD pair, technical indicators for ALGO/BTC are firmly bullish. The MACD, RSI, and Stochastic oscillator are all increasing.

However, ALGO is facing strong resistance at 2,000 satoshis — the previous breakdown level.

If successful in moving above it, the next resistance areas would be found at 3,080 and 3,725 satoshis. 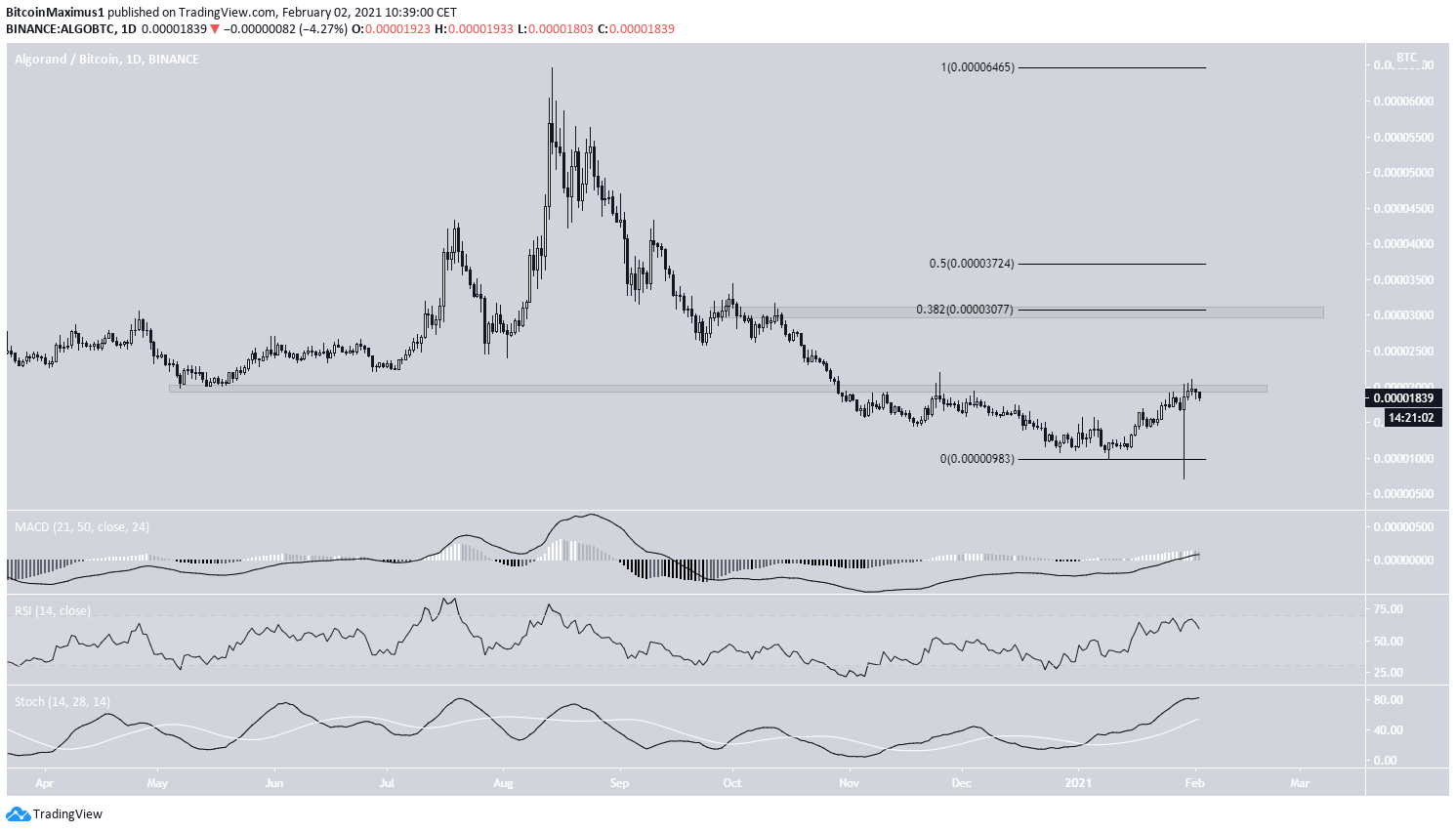 Both the ALGO/USD and ALGO/BTC pairs are expected to break out above their respective resistance areas. The rate of increase for the former is expected to accelerate once it moves above $3.70.