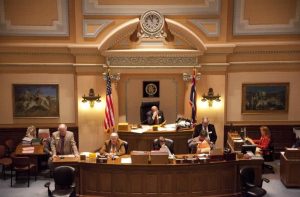 There may be a new way of by-passing the tough New York laws to carry out crypto-related transactions in the world’s capital without acquiring a BitLicense, a crypto license developed by the New York Department of Financial Services (NYDFS) in 2014.

According to a report from members of the committee that drafted laws to govern the crypto banking sector in Wyoming, the state will have the power to charter Special Purpose Depository Institutions (SPDIs), a reserve bank that can act as a crypto custodian. Now, these SPDIs open a loophole that may well allow banks to open branches in NY and carry out their business without the need for a BitLicense.

The loophole first came to light through a tweet sent out by Caitlin Long, member of the Wyoming blockchain taskforce, claiming a solution to the long-standing BitLicense problem. A number of companies have come out publicly rebuking the methods employed by the NYDFS before offering the license. With only 18 BitLicenses dished out since the launch half a decade ago, a multitude of crypto businesses has been locked out of the state during the period.

Chris Land, general counsel of the Wyoming Division of Banking, spoke during the Coindesk Invest conference held in New York assuring companies a Wyoming SPDI can start operations in the city.

“We are fairly confident that the Wyoming SPDI will be able to operate in New York without a BitLicense.”

How exactly do you bypass NYDFS BitLicense?

According to the thread of tweets by Caitlin, the SPDI license from Wyoming offers the banks a state charter which in turn allows operation in about 42 states across the U.S without need for additional licenses. According to Federal law, state-chartered banks of other states, similar to national banks, should have similar laws applying to them and exempted from them.

3/ …of other states, so if a state exempts a national bank from a regulation, then other state-chartered banks are exempt from it too. Thus…drum roll…since NY law exempts national banks from the #BitLicense, #Wyoming's #SPDI almost certainly exempt too (NOT LEGAL ADVICE!)

For instance, in our case, the NY law exempts national banking institutions from acquiring a BitLicense which means most certainly a state-chartered bank (such as Wyoming’s SPDIs) would be exempt from acquiring the license before setting up a business. However, for some states, NY included you will need to open a branch in the state before starting operations.

With the cryptocurrency industry growing as more companies and SMEs integrate these innovative solutions to their business systems, and now an opportunity presenting itself, it is only a matter of time before firms take on the loophole. We’ll wait and see.

The post A ‘Wyoming loophole’ to Carry Out Crypto Transactions Without BitLicense in New York appeared first on Coingape.