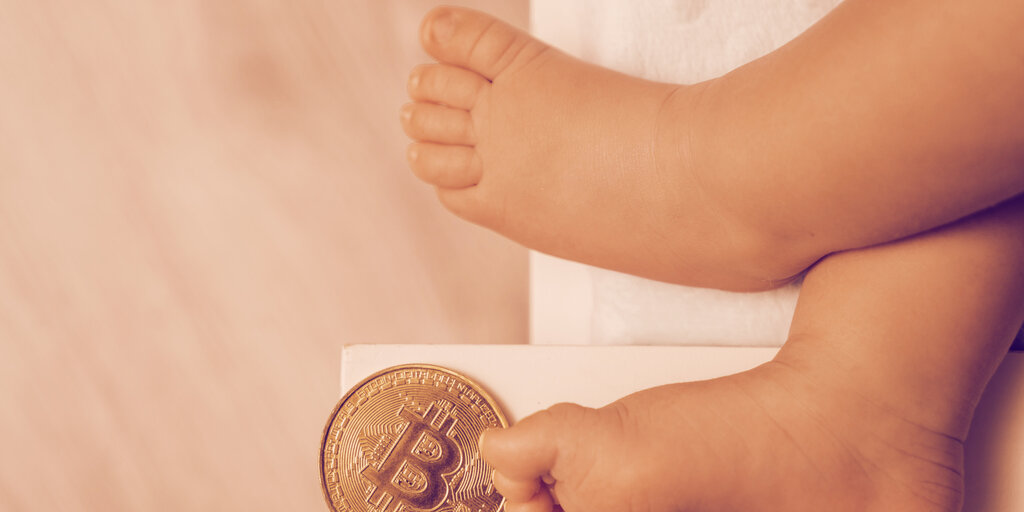 A European man has commemorated the birth of his bouncing baby boy on the Bitcoin blockchain.

The pseudonymous “Tookdrums” posted the news on Reddit on Sunday. He welcomed his firstborn, Noah, into the world on June 14 through a transaction on the Bitcoin blockchain.

“Hello Noah! Welcome to the world little one,” wrote Tookdrums in his transaction. The Redditor had attached the text in hex code in the output.

Because it’s on the Bitcoin blockchain, the message can never be removed. It is “immortalized,” Tookdrums wrote in his Reddit post.

“I thought it a nice and fun way to commemorate this important moment. Also, it was the perfect occasion to start a small saving account for him,” Tookdrums told Decrypt.

Tookdrums, from Europe, married and in his late twenties, said that there’s 0.05 Bitcoin (~$457) in the account, and that he plans to keep adding money to the account; “maybe messages too.”

“I plan to give him the private key of the address on his 18th birthday but depending on his interest I might tell him about the embedded message before that,” he said.

Here’s how he thinks that will go:

“I saved your name and birth-date in this awesome decentralized and immutable database so that nothing and no one could ever remove it.”

“You are so lame and geeky dad!”

“Thanks Dad, you are the best!”

Tookdrums said he considered adding a condition that would lock up his son’s funds until he turned 18, but decided against it in case of a protocol update or any other event that would require him to move the funds.

When asked if he would do the same for his other, unborn children, TookDrums said: “definitely.”

“I could see myself tricking a second child into believing that as his big brother got bitcoin I got dogecoin for him.”

Tookdrums doesn’t work in the blockchain industry; he’s just a Bitcoin hobbyist. He’s tinkered with other blockchain projects, too.

Right now, he’s preparing a gift for a friend in which he would mint an ERC20 token bearing his friend’s nickname, then send him all of the coins for him to distribute as he likes.

And in celebration of his wedding, he was given an empty Bitcoin paper wallet. A few days later, a mysterious benefactor deposited some Bitcoin, attached to it “a private joke helping me guess the password.”

Here’s to Mr and Mrs Bitcoin!