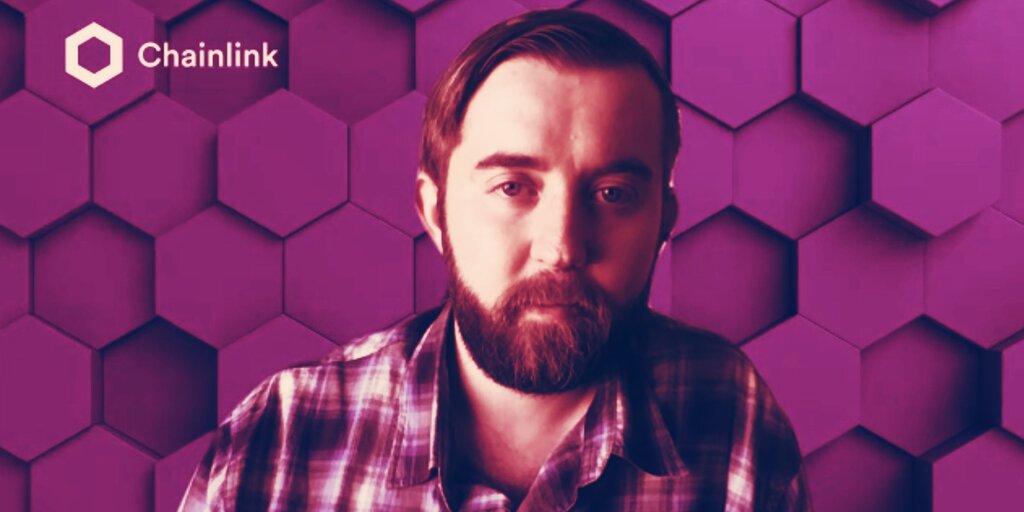 LINK, the token of decentralized oracle provider Chainlink, was one of the best performing cryptocurrencies of 2020—a year that has seen its developer SmartContract carve out an enviable reputation for securely connecting blockchains to real-world data.

“I think it’s fair to say we’re the most widely used oracle mechanism,” SmartContract CEO Sergey Nazarov told Decrypt. “We’ve successfully been able to secure DeFi in the billions of dollars. The value on our networks has stood up to extreme unforeseen events—and our networks have operated through those successfully.”

Chainlink’s achievements this year have been recognized by the World Economic Forum, which named the startup in its 100 most promising Technology Pioneers of 2020 (Bitcoin’s scaling solution Lightning and blockchain forensics firm Elliptic were also named).

Towards the end of 2020, Chainlink was seeing a new integration of its decentralized oracle technology almost every day—from regulated finance operators such as Nexo to wallets such as crypto.com, as well as countless Decentralized Finance (DeFi) projects. Over 300 have now integrated Chainlink.

Securing billions of dollars of value

“This year, we’ve secured more value than even we expected,” said Nazarov. He puts the figure at anywhere between two to five billion, depending on the day.

$LINK Percent Supply in Smart Contracts has reached an ATH of 52.448%

Chainlink @chainlink use-case’s and utility is growing and with this growth will come $LINK appreciation. pic.twitter.com/jMogrNlRSc

Chainlink fended off a variety of “extreme infrastructure events,” Nazarov added, including “extreme gas spikes and even an Ethereum hard fork that briefly took down other systems,” referring to the major outage experienced by the Ethereum infrastructure provider Infura last month. “But our system continued to operate,” he noted.

The issues caused crypto exchanges, including Binance, to temporarily suspend the withdrawal of Ethereum and ERC-20 tokens, but projects which had integrated Chainlink continued to operate normally—something that demonstrated the network’s decentralized reliability, said Nazarov. “What that proves is that not only can we successfully secure billions of dollars in value, but that the incentives of our system enforce reliability.”

A big drive for Chainlink this year has been making more and different types of data available on-chain. There are now around 70 live price feeds—up from 25 in January—but there’s also election data, which, in November, was used to great effect by prediction markets; Chainlink’s verifiable randomness mechanism, which aims to generate more trust for blockchain gaming, and already has Ethereum-based savings game PoolTogether using it; the verifiable proof of reserve mechanism, which is used by stablecoins, such as tUSD, and, recently, weather data has become available for insurance purposes.

Nazarov is particularly proud of Chainlink’s collaboration with insurance providers Arbol, ACRE Africa, and decentralized insurance protocol Etherisc. Chainlink will provide verifiable data about weather conditions for their products, which offer inexpensive crop insurance through smart contracts for farmers in the US, Costa Rica, and Cambodia, and, most recently, Africa.

All that data also forms a virtuous cycle, said Nazarov. Market data leads to more DeFi products, gaming data to more blockchain gaming, and so on—with each sector feeding into the next.

But that hasn’t stopped other blockchains—notably Tezos and Polkadot—from adopting Chainlink’s tech.

This year, Polkadot integrated Chainlink and suggested it will do so throughout its network as it rolls out. Meanwhile, Tezos, which prides itself on being a mission-critical blockchain, said it will expand the financial applications it’s able to offer with the integration.

Chainlink is also putting back into the community, as well as regularly funding integrations of its technology, with a grant program, launched in November.

Those being funded include university researchers, developers working on DeFi development, other Ethereum-based projects, and more.

One of the grants is going to the ACRE Africa and Ethereisc blockchain insurance project, which will enable low-cost insurance for farmers. A recent pilot in Kenya served 250,000 users.

“This is a thing that people thought was going to take years,” said Nazarov. “This is birthing a new category of smart contracts into existence that didn’t, practically speaking, exist before.”

Gartner, among others, has flagged the need for decentralized insurance. Many financial contracts and hedging tools came about to solve farmer’s risk, said Nazarov. “It’s fascinating that we’re actually going back to that use case in some of the initial use cases of smart contracts that aren’t about making tokens.”

The Chainlink team is expanding

This year, Chainlink added two crypto luminaries to its team, which has more than doubled in number in 2020, according to Nazarov.

Ari Juels, previously chief scientist of RSA, one of the world’s largest leading security companies, has joined SmartContract as its chief scientist. Juels formalized the proof of work consensus mechanism, now used by Bitcoin, Ethereum, and others, in the 90s. He also invented proof of retrievability, which is relied upon in decentralized storage solutions, such as Storj.

Chainlink’s second big hire was Ben Chan, former Chief Trading Officer of Bitgo, who has become vice president of engineering. Nazarov pointed out that Bitgo powers 15% of Bitcoin transactions, and, in five years, has never had a breach.

Chainlink, said Nazarov, has spent over a million dollars in security audits, which remains the startup’s number one priority. “As we gain surety that that exists, you’re going to see us rapidly applying that security and reliability to various types of data, to cede ecosystems where developers can now build things that they couldn’t build before.”