,000 Bull Trap? Why Bitcoin Price Is Now Likely to Pull Back Bitcoin price is up 25% for the month of May, but is a pullback now imminent?

Bitcoin (BTC) price was once again sideways last week with price action between bulls and bears proving to be equal. But scenarios look likely for Bitcoin as we approach the month of May comes to a close?

Let’s take a look at what’s happening with the largest cryptocurrency by market capitalization, BTC. 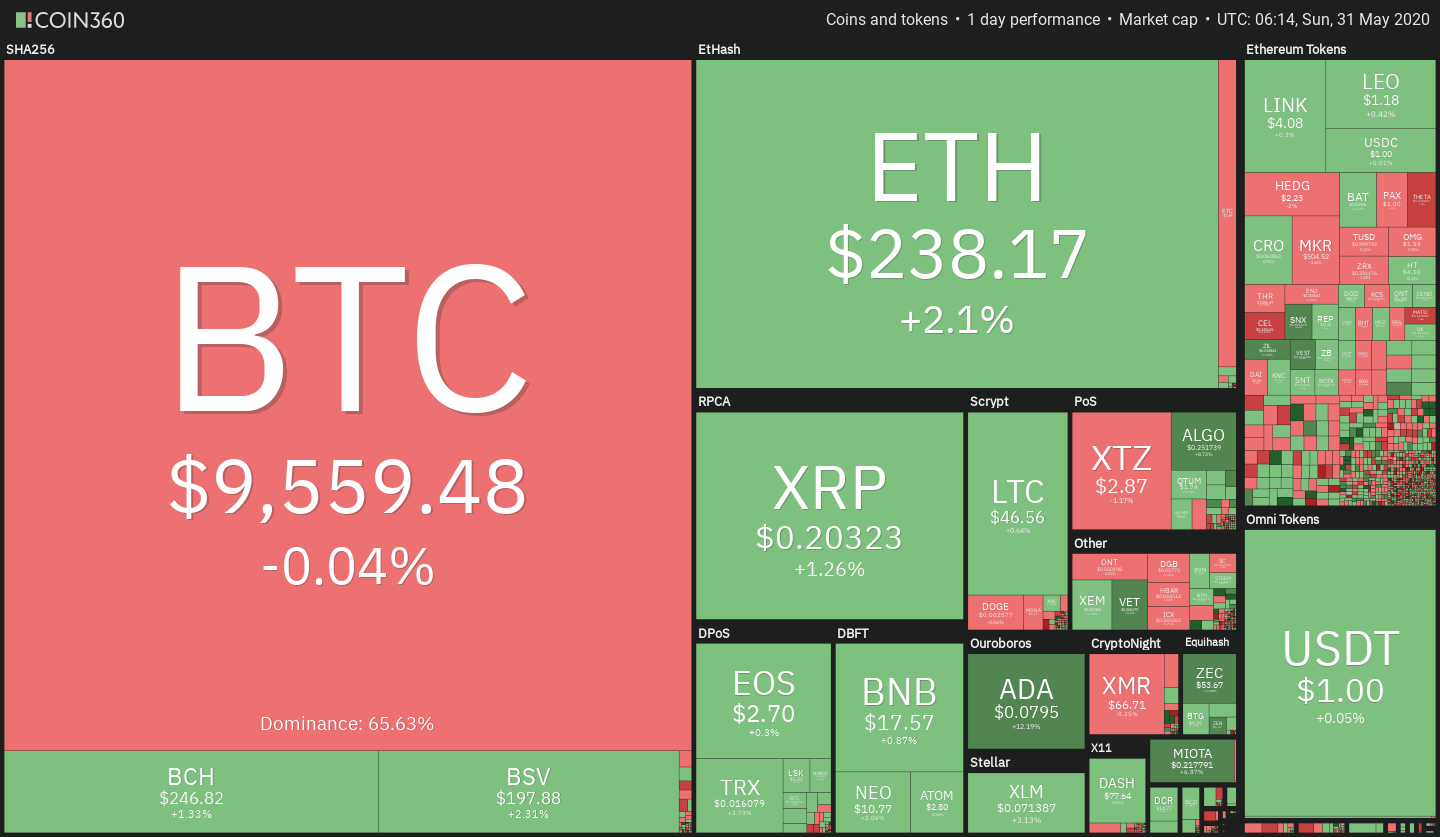 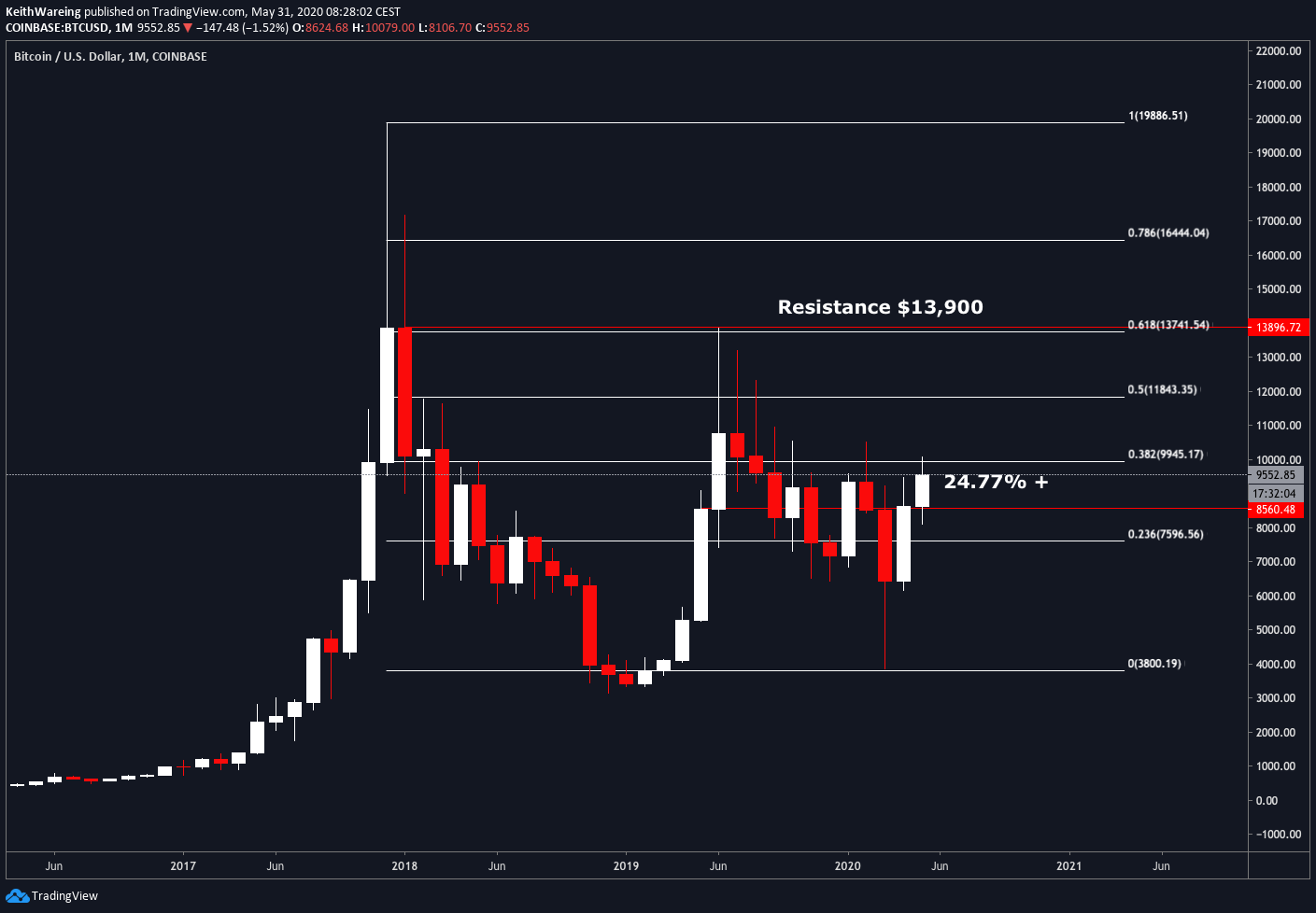 Starting out on the monthly, we can see that Bitcoin grew in value by nearly 25% in the month of May. This is always a nice thing to see. However, since the March 12 dump, it’s nothing for long term hodlers to get excited about just yet.

Nevertheless, as the one month candle is due to open above the .382 fib retracement level, a move up towards the .618 of $13,700 is something to be excited about. With that being said, let’s not get ahead of ourselves, we first need to claim $11,800, and one cannot ignore that a move to the downside is always a possibility for the king of cryptos also.

As things stand, if June was to be bearish, a pullback to between $7,400 and $7,600 is where I’d be placing some buy orders, and that is what I’ll explain today.

The monthly MACD is bullish 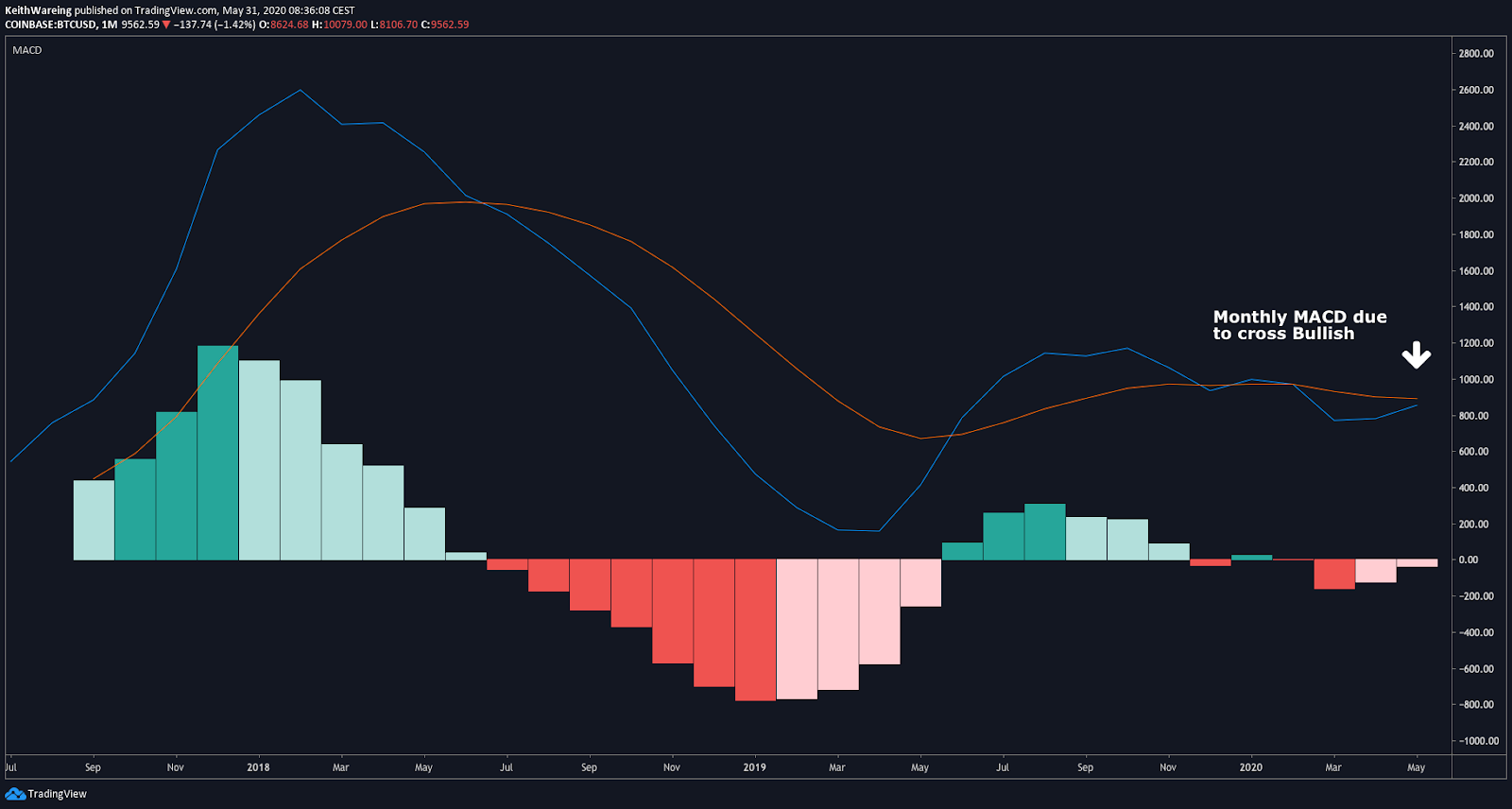 The monthly Moving Average Divergence Convergence (MACD) indicator is set to cross bullish. This indicates a return of upwards momentum for Bitcoin, and history tells us that this serves as a key buying signal to investors.

This is also reflected in the weekly MACD, which crossed bullish at the beginning of the month of May. So as things stand right this moment, Bitcoin looks strong on the higher time frames.

However, for more immediate price movement expectations, we need to drill down to the lower time frames to see what may be in store over the coming week.

Bearish divergence on the daily 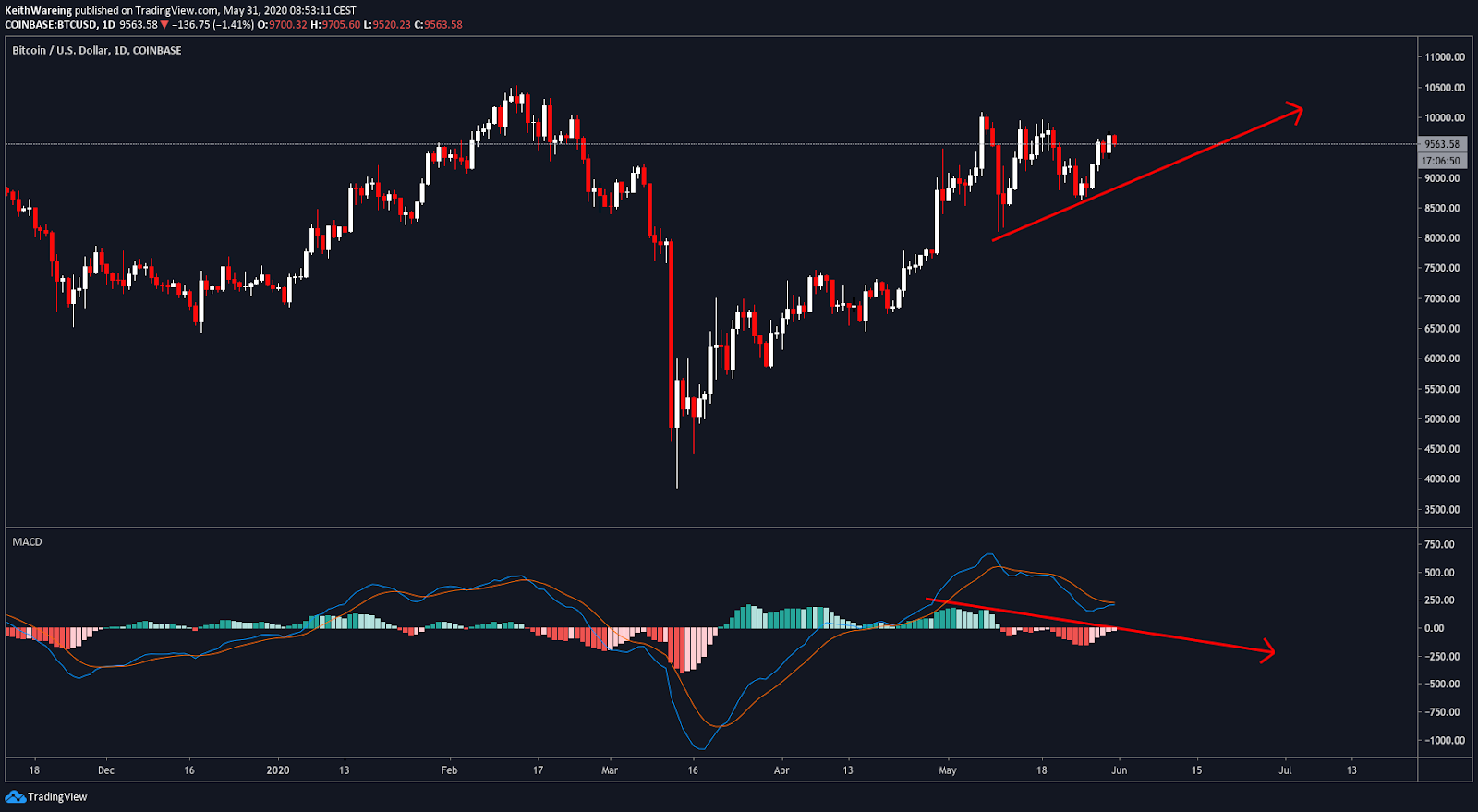 Bitcoin is not only flagging bullish on the weekly and monthly, but it is looking poised to cross bullish on the daily MACD. It almost seems like a trap, as conditions like this on this particular indicator are what dreams are made of.

However, with the price trending up and the indicator trending down we still have bearish divergence showing, and this is not a bullish sign in the least. This tells us that a pullback is due, and a glance over the lower time frames can show us where this might be. 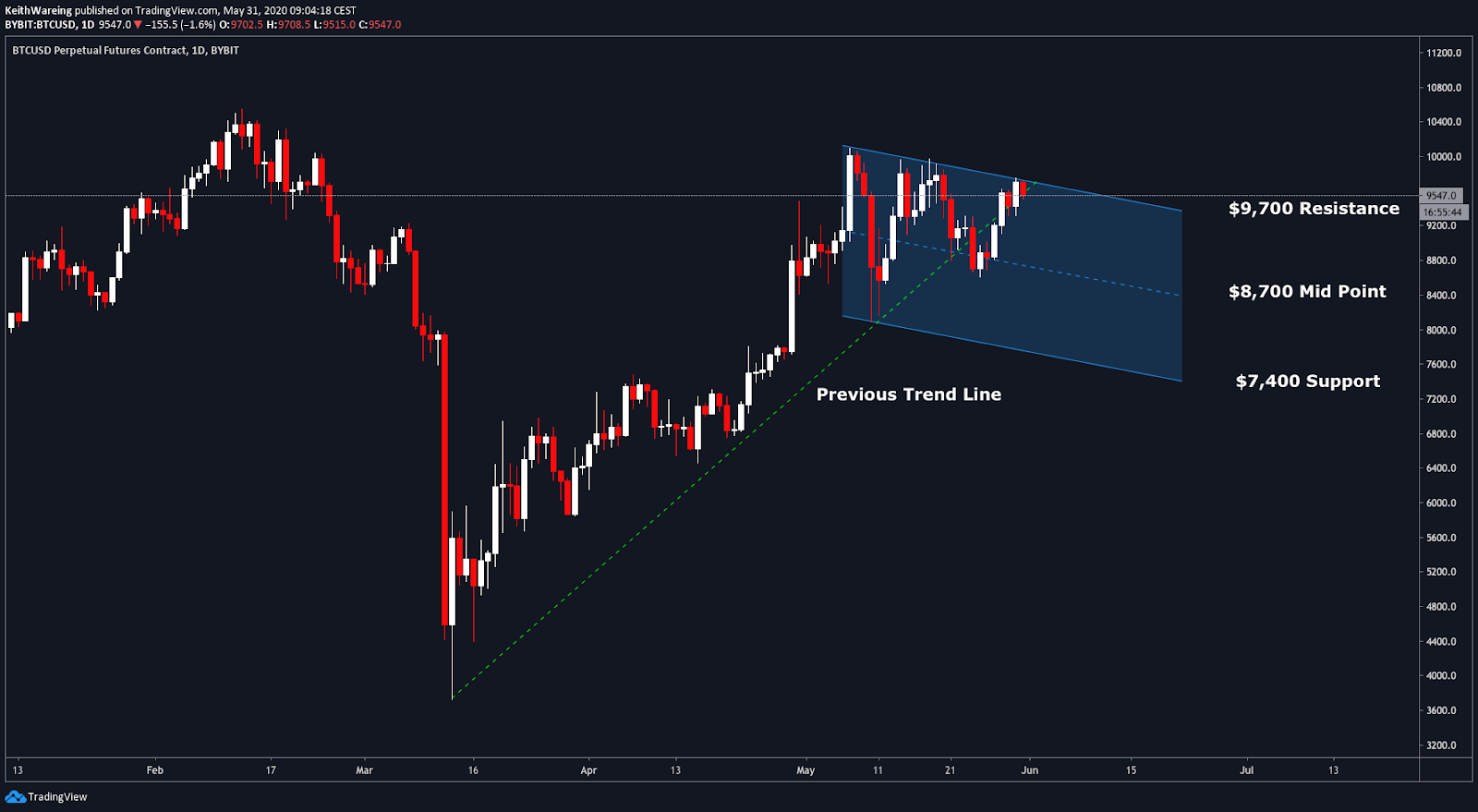 Taking a look at the daily time frame, we can see that Bitcoin broke down below the previous upward trend line last week, and the price has since continued to range through the previous support level, making it difficult to determine which direction the price wants to go.

After such a big increase in price over the last eight weeks, a pullback is somewhat inevitable. However, I’d expect this to be short-lived due to the increased momentum across the higher frames. 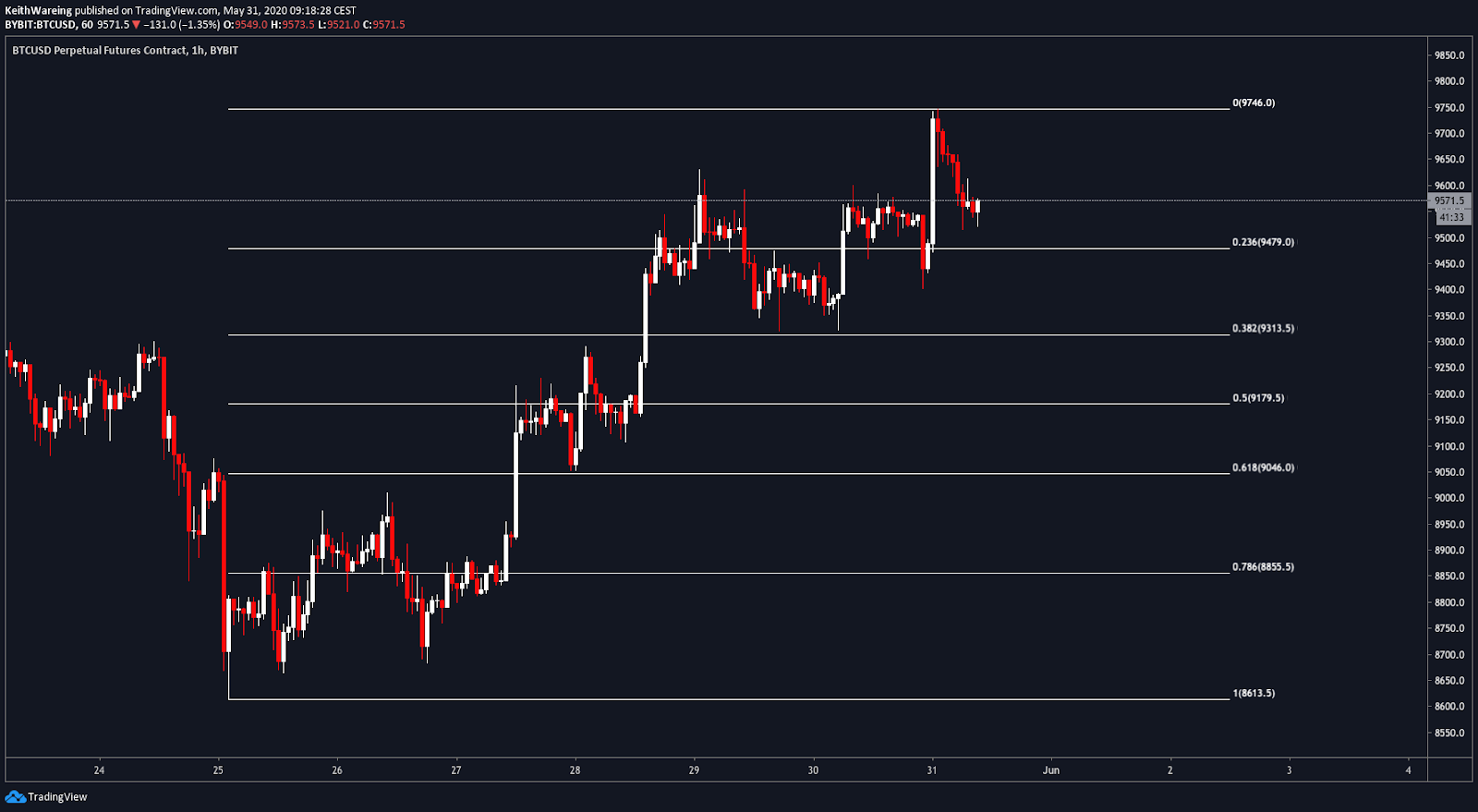 Using the fib retracement levels on the daily chart, it gives us an idea of the levels to expect Bitcoin to hit should it pullback towards the midpoint of the descending channel.