0x Protocol (ZRX) has broken its previous all time high in a massive price surge following the announcement of a large Series A equity round.

0x Protocol (ZRX) appears to be back from the dead following the latest announcement by the project. 0x Labs announced in a recent tweet that the company had secured a $15 million Series A funding round.

The $15 million raised will go to developing the decentralized exchange (DEX) space. Some big players in the crypto industry have invested in the funding round. These include the likes of Pantera Capital.

Pantera Capital describes itself as an investment firm focused exclusively on ventures, tokens, and projects related to blockchain tech, digital currency, and crypto assets. The company has invested in similar DeFi projects such as Balancer.

Pantera Capital has also been extremely vocal about the potential price of Bitcoin. It’s been prescient as well, and called the bull market as early as September 2020.

Pantera Capital CEO Dan Morehead previously stated, “We strongly believe we are in the early stages of a large bull market fueled by both a powerful global macro tide and growing fundamentals in the underlying technology.”

It appears Pantera Capital has no plans on slowing down its investment strategy. That means it will keep focusing on decentralized product offerings within the cryptocurrency space.

Co-Founder and CTO of 0x Project Amir Bandeali acknowledged the success of the latest funding round. This included participation from Coinbase Ventures and several others. Bandeali credited the success to three years of developing the 0x Protocol. The result is a decentralized exchange infrastructure layer and the foundation for open and globally accessible markets.

The future of 0x looks to drive growth and adoption. “While building vertically on top of 0x Protocol” Bandeali stated.

The success of 0x has been a slow and steady grind. The project has flown under the radar for months while development continued. 0x can be credited for its flagship product Matcha. The decentralized exchange aggregator has already clocked over $2.8 billion in trades in a six month period.

The success of ZRX, however, has not been directly from the success of Matcha. The native token of 0x Protocol saw a slow and steady climb over six months, and climbed 100% before seeing a six month decline. The price of ZRX bottomed at $0.30 towards the end of December 2020.

However, the slow recovery has been assisted dramatically by the recent funding news. ZRX had managed to climb over 130% since the December lows. But the last three days have seen ZRX climb an additional 158% to the new all-time high of $1.99. 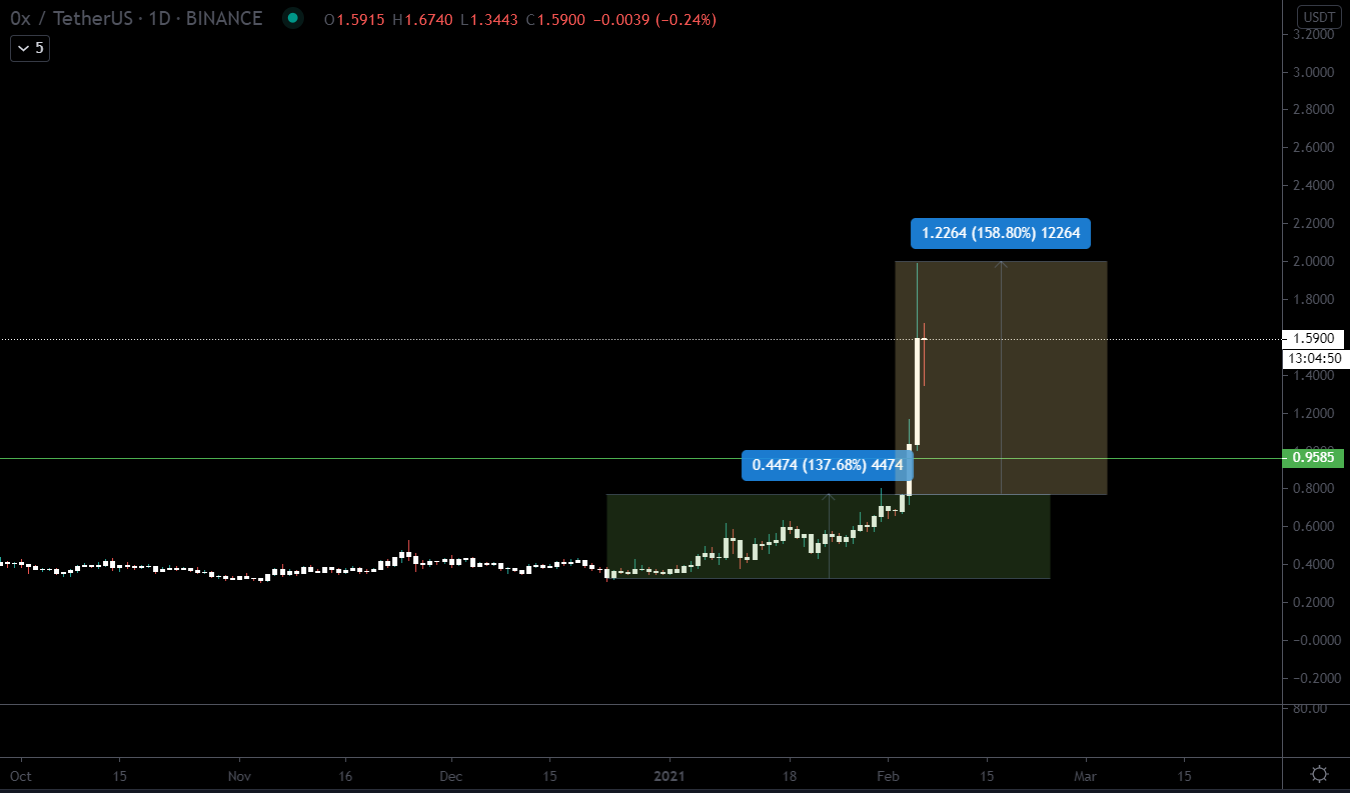 The recent price surge has propelled ZRX into the top 50, with a market capitalization now exceeding $1.2 billion.